Nightmare jellyfish, in the Mediterranean they continue to multiply: some natural remedies useful in case of sting 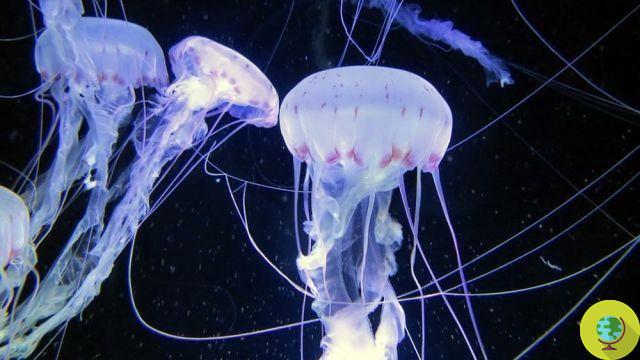 the high temperatures are favoring the birth and reproduction of jellyfish of all species, which are invading the Mediterranean, once foreign to this type of massive phenomenon; and this begins to worry not only for the balance of the marine eco-system, but also for the health of those who bathe. But what to do in case of a sting?

Even in this torrid summer, during the holidays by the sea, the jellyfish phenomenon, which however seems to increase more every year. Accomplice the constant rise in temperatures given from global warming, which is transforming our mild sea into a tropical basin; for this reason we speak more and more often of "tropicalization of the Mediterranean Sea".

In fact, for about six to seven years, jellyfish have been reproducing more and more in our marine waters, so much so that in the last few days they have literally invaded the upper Tyrrhenian Sea, causing serious consequences on tourism, fishing and the health of bathers, especially the youngest ones.

In essence, therefore, the high temperatures are favoring the birth and reproduction of jellyfish of all species, which are invading the Mediterranean, once foreign to this type of massive phenomenon; and this begins to worry not only for thebalance of the marine ecosystem, but also for the health of those who bathe.

They have always been renowned stinging effects of the jellyfish and also this summer there is no shortage of small and annoying incidents: “I receive about a hundred reports a day; for children it has become almost a game, like going to see the lions in the zoo ”- comments Ferdinando Boero, biologist of the marine biology department of the University of Salento.

Jellyfish move with currents and they tend to move vertically: before entering the water it is therefore good to observe the surface of the sea; if there are jellyfish with very long tentacles (i.e. the most stinging ones) it is advisable to avoid bathing in order not to risk - in the most extreme cases - one anaphylactic shock.
If, on the other hand, a jellyfish suddenly arrives stinging us, it is good to get out of the water immediately and wet the wound with sea water (avoid fresh water) and run straight to the pharmacy to ask for one aluminum chloride ointment.
If, on the other hand, you prefer to resort to natural methods - since the ancients grandmother's remedies they proposed vinegar or urine packs have been banned from traditional medicine - prepare a mixture of water and bicarbonate (which has disinfectant power), spread it evenly on the wound e let it act for at least 30 seconds. The baking soda will give you immediate relief - as with any other sting or itching sensation - and will disinfect the injured area. In any case, stay calm, avoid rubbing the wound with sand, or anything else, and avoid washing with fresh water!

add a comment of Nightmare jellyfish, in the Mediterranean they continue to multiply: some natural remedies useful in case of sting