New rules for sugar-filled grains in the UK: Kellogg's doesn't like it and takes the government to court 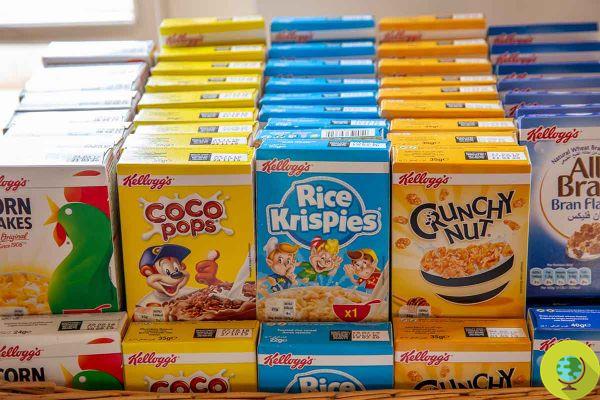 Not happy with the new measures that, in the UK, will soon penalize products that contain too much sugar, salt or saturated fat, Kellogg's has decided to take the government to court

The UK has long since passed some new regulations regarding foods full of sugar, including breakfast cereals from well-known brands such as Kellogg's. These can no longer be prominently displayed on supermarket shelves or placed near the checkouts or at the entrance / exit.


A great damage for the producers, who often focus on these marketing strategies to sell more.

The measure, evidently, could be extremely effective and Kellogg's has decided to try to oppose it, calling the UK government to court.

The multinational that produces the most famous cereals on the market - from Coco Pops to Special K - has launched a real legal action to fight the restrictions on the promotion of products high in fat, sugar and salt (HFSS), in which many of its cereals fall.

The new rules, which will come into effect from October, are part of the government's plan to tackle the problem of childhood obesity. These also include the ban on advertising junk food online and before 21pm on TV, which will only become operational starting next year.

Read also: Fight against junk food: no ads for junk food on TV until 21pm in the UK

Kellogg's reply could be defined as "curious", the multinational claims that the new rules do not take into account the fact that most people (92%) eat cereals accompanied by milk or yogurt, which changes the nutritional profile of its products. which should therefore not be classified as junk food.

Chris Silcock, managing director of Kellogg's in the UK said:

We believe the formula used by the government to measure the nutritional value of breakfast cereals is wrong and not legally implemented. Measure dry grains when they are almost always eaten with milk. All of this matters because, unless you take into account the added nutrients when you eat the cereal with milk, you don't measure the full nutritional value of the meal.

Kellogg's also made it known that he first attempted to "have a reasonable conversation with the government" but that, after the mediation failed, he had no choice but to go to court.

Not just vitamin D, exposure to the sun also has another newly discovered beneficial effect ❯

add a comment of New rules for sugar-filled grains in the UK: Kellogg's doesn't like it and takes the government to court