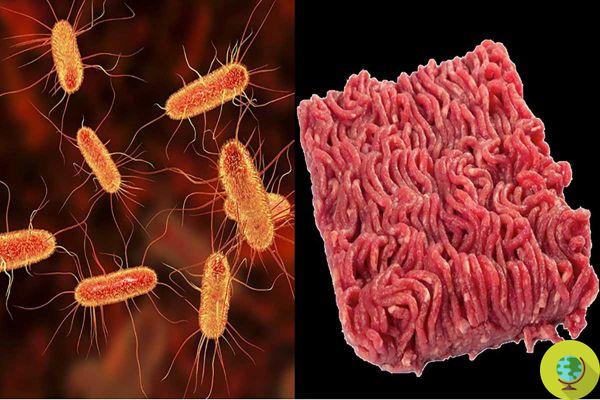 20 tons of ground beef could be contaminated with E. Coli and have been recalled to the United States for this

A huge amount of ground beef, sold in the United States in several supermarkets, has been recalled due to possible E. coli contamination. A new scandal that is added to many others that have occurred in recent years.


In the United States, scandals relating to meat come out with some regularity: burgers, minced meat but also pink slime. Last year, more than 200 people were infected with E. coli as a result of eating ground beef.

E. coli: in the US more than 200 people infected with minced meat

The recall this time concerns nearly 43 thousand pounds of minced meat (about 20 tons), a huge amount of food that was on sale in various supermarkets, including Walmart.

To sound the alarm on Food Safety and Inspection Service (FSIS) of the Department of Agriculture US who specified that the recall was requested by Lakeside Refrigerated Services of Swedesboro, New Jersey. This relates to some packs of ground beef produced on June 1 after a safety issue was discovered during routine FSIS testing.

The products, which have been sold under brands such as Thomas Farms and Marketside Butcher, can be contaminated by the strain of Escherichia coli O157: H7, and show the factory number “EST. 46841 “within the USDA inspection mark.

The packages were shipped to various outlets nationwide but no confirmed cases of adverse reactions from the consumption of these products have been reported.

The FSIS, however, fears that some packs of meat may still be in the refrigerators or freezers of American consumers, therefore the alert is maximum.

THE. coli O157: H7 is indeed a potentially deadly bacterium which can cause dehydration, bloody diarrhea and abdominal cramps. While most people recover within a week, some develop a type of kidney failure called hemolytic uremic syndrome (HUS). This condition can occur among people of any age, but is more common in children under the age of 5 and in adults. It is characterized by bruising, paleness, and reduced urine output. People experiencing these symptoms should seek emergency medical help immediately.

The USDA classified the announcement, not surprisingly, as a recall of "Class I", which defines “a hazardous situation for health in which there is a reasonable probability that the use of the product will cause serious consequences on health or death“.

New side effect of ultra-processed foods: they increase the risk of stroke and second heart attack ❯