New coronavirus strain discovered, much more contagious (and dominant) than the "original". I study

A team of American scientists has discovered a new, more contagious coronavirus strain that would mutate from the original and become the dominant one

Some American scientists, following a recent study not yet peer-reviewed, have come to the conclusion that the coronavirus has mutated and that the new strain, which has become dominant all over the world, is more contagious.


A research team from Los Alamos National Laboratory in New Mexico (United States) has identified a new coronavirus strain that appears to be more contagious than the one that spread in the early days of the pandemic.

The report is based on an analysis of more than 6.000 coronavirus sequences from around the world, collected by the Global Initiative for Sharing All Influenza Data, a German organization.

The Los Alamos team, with the collaboration of scientists from Duke University and the University of Sheffield in England, identified 14 mutations but the study authors specifically focused on a mutation called D614G.

The new strain identified would first appear in February in Europe and then he would quickly emigrate to the east coast of the United States. According to this study, since March it has become the dominant strain worldwide.

The two varieties that appear to combine according to the study's graphs, G614 (blue) and D614 (orange) increased in late March around the world but it was G614 that became the dominant one. 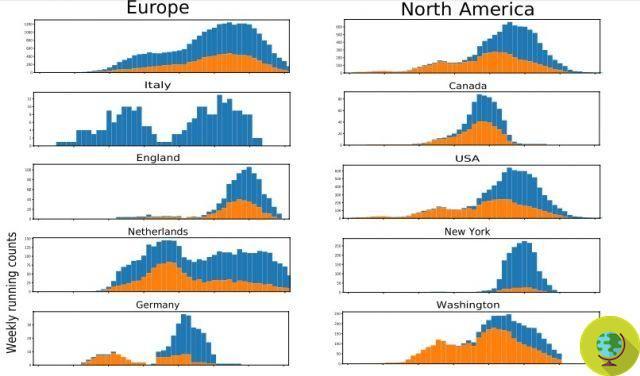 The fact is that, according to the study, the new strain spreads more quickly and could make people more vulnerable to a second infection after having already contracted the disease for the first time.

The 33-page report was published on BioRxiv, a website that researchers use to quickly share their work for other scholars to view and accelerate collaboration with scientists around the world working on COVID-19 vaccines or treatments. But, remember that these are preliminary reports that have not been peer-reviewed.

The search for drugs and vaccines capable of eradicating the new coronavirus is largely based on the genetic sequence of the previous strains and, therefore, these tools may not be effective if the virus has actually mutated during these months.

The mutation identified in the new report concerns the now known Spike (S) protein, which is the one that allows the virus to enter human respiratory cells. The report's authors claim to have heard a "urgent need to issue an early warning " so that vaccines and drugs under development around the world are effective against the mutated strain.

The study also warns that if the pandemic doesn't wane with warmer weather, the virus could undergo further mutations.

David Montefiori, a Duke University scientist who worked on the report, said he is the first to document a mutation in the coronavirus that appears to be making it more contagious. However, it is not yet known whether this mutated virus can explain the variations in the force with which COVID-19 is affecting different parts of the world.

Among other things, the Los Alamos study does not indicate that the new version of the virus is more dangerous. People infected with the mutated strain appear to have higher viral loads but the University of Sheffield study authors found that among a local sample of 447 patients, hospitalization rates were nearly the same for people infected with the different strains of the virus. .

While the mutated coronavirus is no more dangerous than the others, it could still complicate efforts to keep the pandemic under control. It would be a problem if the mutation made the virus so different from previous strains that people who developed previous immunity could no longer benefit from it.

If so, could make "people susceptible to a second infection", wrote the study authors.

add a comment of New coronavirus strain discovered, much more contagious (and dominant) than the "original". I study