Natural and non-cold remedies: which are really effective? 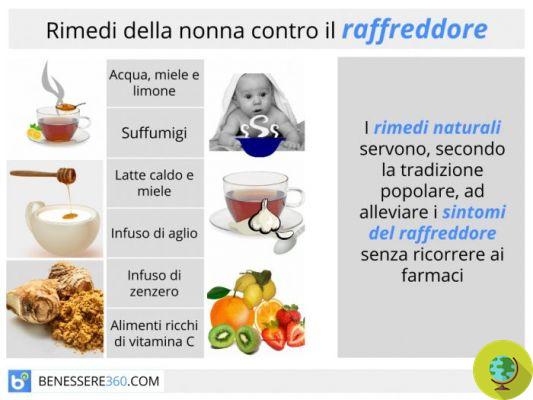 Effective or less effective remedies for colds. The analysis carried out by a Canadian professor on the most recent scientific research on the subject.

The most common and used remedies for colds are they really effective? To find out Michael Allan, in Canada, together with Bruce Arroll of the University of Auckland, looked at hundreds of studies on what works to prevent and treat the common cold and found that, according to the results obtained from scientific research, many folk remedies have little. or no benefit.


According to Allan, for example, the most common natural remedies such as Vitamin C, garlic, ginseng and echinacea are not needed while "the best things to prevent a cold that we know are still the basics: wash your hands and avoid contact with sick people".

The Probiotics that “could be beneficial” and the honey, especially useful for children (but not those under one year of age for which this food is not recommended). A single dose of honey in the evening, or half to two teaspoons, can have a small beneficial effect on children's cough and sleep. However, there are no data concerning adults.

The Canadian professor did not spare even traditional drugsTreatments like Vicks Vaporub, he says, show controversial benefits and antibiotics, of course (since they fight bacteria and not viruses that cause colds), have not been shown to be effective. Only a few combinations of antihistamines and decongestants are saved which show some benefit in adults but should never be given to children under 6 years of age.

In short, summing up, better not to catch a cold and avoid contagion. If you have taken it then hold on until it passes you since there is practically little or nothing you can Do!

But this is what Professor Allan thinks, we continue to recommend some natural remedies especially Vitamin C, echinacea, garlic, ginger, colloidal silver, essential oils, etc. that being able to stimulate the immune system (and not specifically treat the cold), in particular if taken preventively and at the first symptoms (when the viruses are still a limited number) can be a valid support to the body in the fight against viruses and bacteria!

Remember that a strong immune system is the most effective defense against disease!

- Essential oils against colds: what they are and how to use them

add a comment of Natural and non-cold remedies: which are really effective?