Nanoparticles and food. What role do nanoparticles play in food and agriculture? Nanoparticles are microscopic materials, significantly smaller in size than blood cells, which can enter the bloodstream through food containing them.

What role do the nanoparticles negli alimony and in agriculture? Nanoparticles are microscopic materials, significantly smaller in size than blood cells, which can enter the bloodstream through the foods that contain them.


They can contribute in the transport of nutrients, in maintaining the freshness of food for longer, act as thickeners or have a role in the storage and in 'enhancement of flavor of the same. Science is currently still establishing what theimpact of these particles, which became part of the food industry a decade ago (with particular reference to the United States) on our health and the environment. Although their safety has not yet been proven, their use continues.

La concern for the environment and for health concerns nanoparticles created in the laboratory, as some materials may begin to behave differently from expected once reduced to microscopic dimensions. According to the British organization As You Saw, which has been trying to control the use of nanoparticles for years, materials reduced to nanoparticles, both in natural processes and in the laboratory, can present alterations with regards to color, the ability to conduct electricity and permeability.

The mutation of their properties could be a source of concern regarding their use in foods, as flavor enhancers, as preservatives or for other purposes. The the companies manufacturers of packaged foods they are not obliged to declare the presence of nanoparticles within them and up to now probably not enough questions have been asked about the safety of their use by the food industry.

As for the United States, from the point of view of the Government, the silver, iron or titanium nanoparticles they are no different from their source materials, which have already been specially tested for safety. However, the nanoparticles come into direct contact with the food we bring to our tables.

This is the case, for example, of bananas, which in order to travel enormous distances from plantations to our tables can be surface treated with substances that help improve their appearance and conservation. In the United States, it is suspected that this has already happened through the use of nanoparticles with regard to bananas from Latin America.

Nanoparticles can also be used for water purification, as gelling agents e in the packaging used to protect food from UV rays. They can be present in plastics, paper, paints, but also in personal care products such as i toothpastes and in some foods.

In the United States they have been analyzed different packaged foods, among which we recognize the M & Ms, accompanied by chewing-gum and candies Mentos, products in which the presence of nanoparticles of titanium dioxide. According to experts, those who consume packaged foods consume a certain amount of titanium dioxide nanoparticles every day without their knowledge. Subjects children are more at risk, to which they are administered without concern industrial confectionery of various kinds and packaged and frozen products. In the case of children under the age of 10, an intake of 1-2 mg of titanium dioxide nanoparticles per kilogram of weight per day can be reached. 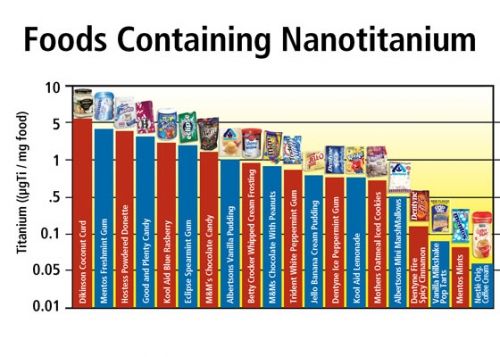 However, the nanoparticle issue does not only concern the United States, but also theEurope, where major concerns seem to have arisen regarding theirs use in packaging used for food. According to the "European Institute for Health and Consumer Protection", the use of nanoparticles for the realization of the packages will reach a market of over 20 billion by 2020. Some examples? The nano-aluminum used for the production of tinfoil, so that it does not adhere to food, and the nano-silver, used in some food containers with antibacterial functions.

Given the widespread use of nanoparticles both directly in the production of food and for the realization of their packaging, and theuncertainty of their long-term effects on the environment and health, it would be necessary for experts to undertake to carry out and disseminate more in-depth studies about.

add a comment of Nanoparticles in food? We're already eating them