According to a new study, psoriasis on the nails is indicative of a more serious condition.

Psoriasis, never underestimate the nails. This is the warning that comes from some dermatologists who warn against the so-called "nail psoriasis", which could be considered the alarm bell of a much more serious disease.


Psoriasis that affects the nails, in fact, is too often considered a "simple" aesthetic problem, but it is not so: psoriasis here is indicative of a more serious pathology.

In a survey conducted by some researchers of the Department of Dermatology of the Roman University of Tor Vergata, it is emphasized that psoriasis on the nails actually compromises the quality of life in a very serious way, to the point that, according to some data, "the discomfort it also exceeds that caused by less “visible” chronic diseases such as diabetes or arthritis ”, explains Elena Campione who coordinated the research.

Psoriasis is a chronic inflammatory disease that affects up to 3% of the general population. The prevalence of nail involvement in patients with psoriasis ranges from 15% to 79%.

While the nails represent a small portion of the body surface, psoriasis in these areas can have a disproportionate influence on a patient's physical and psychosocial activities.

“It is estimated that 90% of those suffering from psoriasis - the study reads - develop that to the nails sooner or later in the course of life. In part it depends on the anti-psoriasis therapies themselves, which are immunosuppressive: the reduction of the activity of the immune system leads to the development of fungal infections on the nails and these in turn are the trigger of a local psoriasis. A vicious circle that must be stopped as soon as possible with the appropriate therapies: when onychomycosis, or infection by a fungus, is suspected in a patient with psoriasis, a test must be made to ascertain it. Just take a piece of the nail and put it in culture to be sure: the test is very simple and is also useful when a nail psoriasis does not heal, precisely because an infection could be superimposed ".

Keeping an eye on the nails is therefore a constant that should not be missed, especially for the fact that in that area psoriasis can indicate the presence of a more serious disease. An example would be one digression towards psoriatic arthritis - observes Campione -. Nail psoriasis is in fact part of the so-called psoriatic triad, which includes the disease extended to the scalp and that involving the skin folds: when psoriasis affects all three of these areas, it means that it is more serious and must be treated more aggressively. . "Unfortunately, even today problems with nails, scalp and folds are often considered individually, without understanding that they are all expressions of a disease that is worsening".

What are the right treatments when psoriasis symptoms appear on the nails? “The choice depends on the quality of life reported by the patient and the extent of psoriasis: if the impact is high and the skin is severely affected, systemic therapy may be appropriate, also useful when patients can no longer bear to spread creams and lotions. These can be fine in case of nail psoriasis that is not too annoying for the patient or does not extend into various skin areas. The important thing is not to neglect psoriasis on the nails, but to intervene as soon as possible and then keep the attention high to intercept any worsening of the general disease ".

How to recognize nail psoriasis 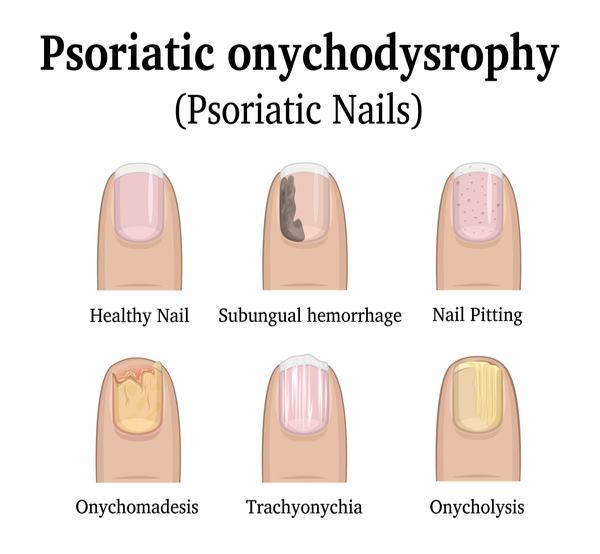 Nail psoriasis, both of the hands and feet, has a chronic course, with remissions and relapses and can cause a profound disruption of the nail structure.

In general the symptoms are:

Psoriasis: phototherapy to treat it for free directly at home ❯

add a comment of Nail psoriasis: causes and symptoms of nail psoriasis to be reckoned with