Monkeypox: Between misinformation and alarmism, the matter is more complicated than it seems 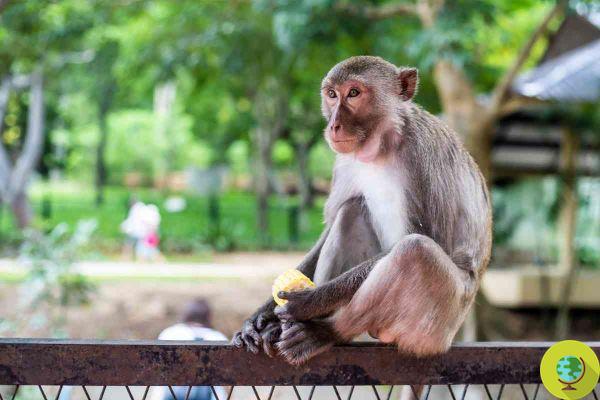 China reports first human Monkey B Virus (BV) infection and subsequent death, but it is not "monkeypox".

China reports first human Monkey B Virus (BV) infection and subsequent death. From here talking about "monkeypox" was a moment. But they are not the same


The confusion, in reality, derives from two news items that arrived at the same time: one comes from China and is the death of a veterinarian caused, apparently, by the Monkey B Virus, the other instead concerns the existence of an outbreak in the United States of "smallpox of monkeys ”(which is scientifically referred to as Monkeypox). Let's clarify what is happening and what the differences are.

They are two rare but life-threatening diseases and the root "Monkey" in the name is actually creating confusion.

The Monkey B virus made headlines after the Chinese Centers for Disease Control and Prevention revealed that a 53-year-old biomedical researcher died of the virus. The vet dissected two monkeys who died on March 4 and March 6, 2021, only to develop nausea, vomiting and fever "with neurological symptoms". In May he died.

On the other hand, from Texas came the report of a patient who contracted monkeypox, a virus that is transmitted mainly by rodents and leporids. The man had just returned from Nigeria when he experienced the first symptoms and is now hospitalized in Dallas in stable condition.

The Monkeypox and Monkey B virus have completely different causes

Monkeypox is caused by the monkeypox virus, which is the same genus as variola virus, the cause of smallpox. Monkey B Virus (BV) is a form of the herpes B virus.

Monkey B virus infections in people are usually caused by macaque monkeys, the CDC says. While chimpanzees and capuchin monkeys can contract the Monkey B Virus (BV), they usually die from the infection.

What is the Monkey B Virus

It is a pathogen belonging to the family ofHerpes which infects macaques. It is very rarely transmitted to humans and if it does it is capable of attacking the work nervous and cause of encephalitis, ie inflammation of the brain. It can lead to unconsciousness and, if left untreated, to death in 80% of cases.

Il first known case dates back to 1932 and to date there are about 100 infections in humans. It is mainly veterinarians and people who worked closely with animals who are infected. According to experts, the Monkey B-Virus has adapted perfectly to the macaques and is unlikely to mutate again.

What is Monkeypox or Monkeypox

It was discovered in laboratory monkeys in 1958, then, in the early 70s, it was identified as the cause of a disease in humans similar to smallpox in some remote parts of Africa. This disease is caused by the Monkeypox virus which belongs to the orthopoxvirus group. Other viruses from the same group that can infect humans include smallpox virus, vaccinia (used in smallpox vaccine) and cowpox virus (there is no specific treatment for monkeypox, but it has been reported that in Africa the risk of contracting monkeypox is reduced in people previously vaccinated for smallpox).

There are some symptoms that overlap between monkeypox and monkey B virus. According to the American CDC, symptoms include:

These symptoms are followed by bulge which progress through five separate stages, ending with crusts falling off. The disease usually lasts for two to four weeks.

The can be more severe because further small ones can develop as a result of these symptoms blisters in the area of ​​the body that has been in contact with the animal, together with:

If the disease progresses, the virus will spread and cause swelling of the brain and spinal cord, causing symptoms such as:

Nighttime hot flashes: Not just menopause, they could be a side effect of these bad habits ❯

add a comment of Monkeypox: Between misinformation and alarmism, the matter is more complicated than it seems