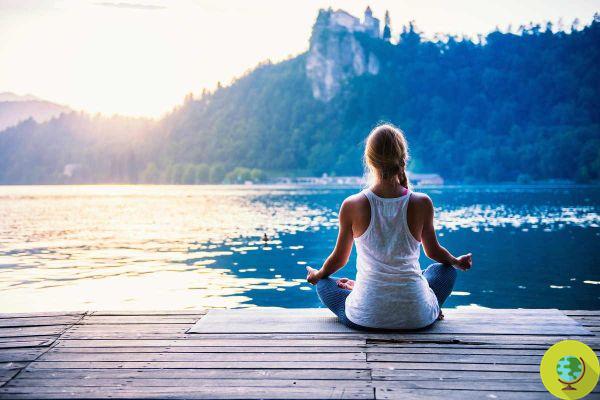 
Mindfulness e trough. It is now well known: if practiced regularly, the meditation improves our psycho-physical health and now a new one search suggests what the ancient Buddhist meditation practice might be like as effective as modern drugs also for fighting depression.

If, in fact, the "Awareness" of one's thoughts, actions and motivations (this is the meaning of mindfulness meditation) has proved capable of relieve stress in a short time and it is also useful to give an answer to an inner suffering and to reach a self acceptance, this type of meditation could also reveal itself as a cure-all against depressive states in the same way as drugs.

The researchers found that patients who follow an MBCT path, inspired by ancient oriental meditation, have more or less the same relapse rates of those who take antidepressants. In fact, in two years of observation, the relapse rates were 44% or in the MBCT group compared to 47% in the drug-taking group.

This suggests that there is a valid "alternative treatment" to medicines without side effects: even if it does not lead to "complete recovery", do you want to put ?!

An MBCT treatment cycle typically lasts eight weeks and is mainly based on meditation, but it also includes the cognitive behavioral therapy and yoga. Through conscious breathing exercises we try to bring attention to the "here and now", that is to the sensations of the moment. In this way, you develop a healthier relationship with yourself, positive feelings and thoughts.

What a world, then, would be one in which dark evil is kept at bay without swallowing toxic substances, authentic poisons for our organism. And how nice it would be if depression were recognized as disabling and meditation courses were provided through a (deaf) national health system ...

Meditation: the best natural remedy for anxiety and depression

Meditation for physical and mental wellbeing. Confirmation from Australia

Walking meditation: what it is and why you should include it in your daily routine ❯

add a comment of Mindfulness Meditation: The Best Natural Antidepressant