Microbial cloud: did you know that each of us has our own bacteria around us? 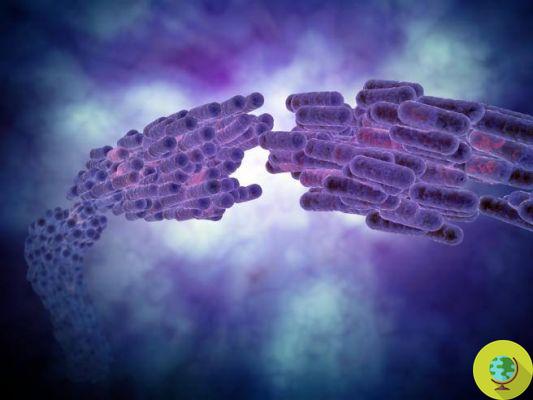 Each person is surrounded by a microbiome, invisible to sight, made up of millions of bacteria


Microbial cloud: i.e. a (semi) unknown population of microorganisms that we carry with us. Light years away from having the famous spiritual aura, we are actually surrounded by a microbiome, invisible to sight, composed - rather - of millions of bacteria. Much less courtly, in short.

Researchers from the University of Oregon have thus discovered that all but their own we all have this kind of cloud around us, so much so that we speak of an authentic "unique and unrepeatable biological footprint.

According to the research, in fact, if air samples are taken in a room where a person has stayed, it can be traced back to that same person if previously information was collected on his personal "microbial cloud", through the sequencing of the microorganisms present.

Bacteria, viruses and fungi: everyone, in short, brings their own and they are very recognizable.

The experiment - The American researchers carried out a series of tests in different sterilized experimental chambers (clean rooms), leaving 11 people free to move inside them. They then identified and "isolated" for each participant the trace of their personal cloud of bacteria and took samples of the air that surrounded them and analyzed them in the laboratory for microorganisms. Well, the results showed that every single individual has their own biological "aura".

"We knew we could analyze the microbiome in the cloud around the person - said one of the researchers, James Meadow -, but we were very surprised to find that this cloud is specific to each individual".

In short, a cloud composed of some bacteria that are always found in humans, such as Streptococcus, a group found in the upper airways, or Propionibacterium, which is found in the skin. But then from person to person this army of microbes varies, so much so that 14 million sequences of different types (mix) of bacteria have been identified that can combine.

So be careful, even our bacteria leave traces!

SHOPPING BAGS, BACTERIA COVEN? HOW TO MAKE THEM SAFE (AND GREEN)

TIPS AND REMEDIES TO PROTECT OUR BODY FROM VIRUSES AND BACTERIA

Nutristyle: the mitochondrial diet in which calories are not counted but oligonutrients ❯

add a comment of Microbial cloud: did you know that each of us has our own bacteria around us?