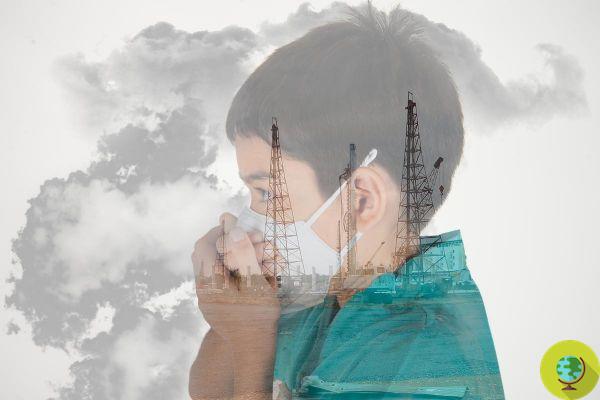 
That air pollution has a heavy impact on our health is now well established. Now a new study has found that fine particulate matter depositing in the brainstem of young people is associated with molecular damage linked not only to Alzheimer's, but also to Parkinson's disease.

It is a whose research results are undoubtedly to be explored but, if the discovery is confirmed, it will have very important implications globally, considering the number of people around the world who breathe polluted air every day.

Researchers, who examined the brainstems of children and young adults exposed to air pollution throughout their lives in Mexico City, found disturbing evidence of the damage it did to their brains.

The new study, conducted by a team led by Lilian Calderón-Garcidueña of the University of Montana (USA) and published in the journal Environmental Research, found abundant pollution nanoparticles in the brain stem di 186 children and young people from Mexico City between 11 months and 27 years.

These microscopic particles are likely to have reached the brain after arriving in the bloodstream through the nose or intestines.

The team found that the metal-rich nanoparticles matched the shape and chemical composition of those produced by traffic that are abundant in the air of Mexico City and many other cities.

The nanoparticles they were tightly associated with abnormal proteins that are the hallmarks of Alzheimer's, Parkinson's and motor neuron disease (MND). In essence, the researchers found the markers of these neurodegenerative diseases in young people. However, these proteins have not been identified in the brains of people of the same age from less polluted areas.

This has led the researchers to conclude that air pollution, whether inhaled or ingested, exposes people to potential neurological damage.

Not only did the brainstems of the young people in the study show "distinctive neuropathological signs”Of Alzheimer's, Parkinson's and MND, but there were also high concentrations of nanoparticles rich in iron, aluminum and titanium in the brain stem, particularly in the substantia nigra and cerebellum. Damage to the substantia nigra is directly linked to the development of Parkinson's disease in old age.

The one thing common to all of the young people in the study was their exposure to high levels of particulate air pollution.

There is already some previous research that has shown that increased exposure to air pollution increases the risk of getting neurodegenerative diseases but, for the first time, the new study shows a possible physical mechanism that causes the damage.

The same researchers have been cautious of the results by stating that nanoparticles are a likely cause of the damage but it remains to be seen whether neurodegenerative disease will actually develop later in life.

As the professor stated Barbara Maher, of the University of Lancaster, in the UK, part of the research team:

“So far we can't prove causality, but how can these nanoparticles containing those metallic species be expected to be found inert and harmless within brain cells? This is the smoking gun: it seriously looks like those nanoparticles are firing the bullets that are causing the observed neurodegenerative damage. "

Professor Louise Serpell, from the University of Sussex, UK, said the nanoparticles were a plausible cause of brain damage, but there was not enough evidence that they were the ones causing neurodegenerative disease:

“There are many other probable causes of neurodegenerative diseases. But our environmental exposure to pollution and pathogens is probably very important in triggering the disease. "

Too much sugar and binges of sweets damage memory ❯