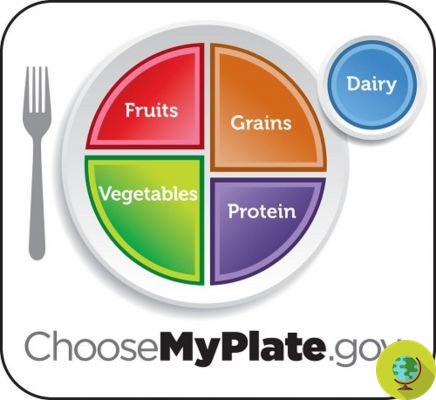 To prevent obesity, very common in the States, Michelle Obama has placed the dish next to the food pyramid. More fruit and vegetables and goodbye to sugary drinks


United States. We run for cover. Against the growing obesity la first lady Michelle Obama proposed, as an alternative to the food pyramid, the dish. As we know, food is a major problem in the States, and obesity is one of the leading causes of death.

To this end, Mrs. Obama has provided some advice on how eat better. And here is that the classic pyramid has been replaced by the daily dish, divided into four areas, each of which, based on the size, indicates the daily consumption suitable for each category of food: the first at the top left, is that of fruit (preferably in season, editor's note); the second, lower left and larger than the others, is dedicated to vegetables; on the right side of the plate, however, we find cereals and, in reduced quantities protein. Do not forget the small saucer containing milk and derivatives, next to.

But that is not all. In addition to the plate, the First Lady also provided some guidelines divided into three basic areas:

Also thanks to the place dedicated, ChooseMyPlat.gov, Michelle has therefore provided the American population with a valuable tool to learn how to eat well. There fight against overweight and obesity it must in fact be undertaken as a preliminary, through prevention and proper nutrition education.