Mercury that poisons women and children. The countries with the highest risk of contamination

Mercury enters the body and can cause very serious problems for women of childbearing age and pregnant women. A new study confirms that this metal can have serious consequences.

Il mercury it penetrates the body and can cause serious problems for women of childbearing age and pregnant women. A new study confirms that this metal can have serious consequences.


The new study, the largest to date, analyzed women's 25 countries at high risk of mercury, a powerful neurotoxin that can also harm the fetus.

From Alaska to Indonesia, women often come into contact with mercury very early, on the one hand for industrial pollution, on the other hand for the extraction of gold, without forgetting that in these countries they follow each other diets rich in fish.

All of the women involved in the study were found to be contaminated, and in large part were contaminated by mercury in Pacific fish.

I higher levels have been found in women Indonesian where mercury is heavily used in gold ore mines, this extraction leads, in fact, to serious pollution. But the women of Kenya, Paraguay and Myanmar are not immune, but also those of Nepal, Nigeria and Ukraine.

"Millions of women and children working in the mines are led to be contaminated by mercury which compromises their health, damaging the brain," he said. Yuyun Ismawati, Indonesian from Ipen, a coalition of NGOs that produced the scientific report.

"One's mercury contamination it is ubiquitous in marine systems and freshwater throughout the world. This study underlines the importance of global cooperation to tackle mercury pollution ”. 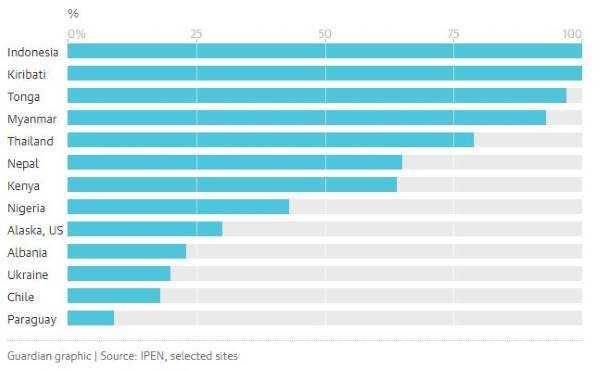 In this sense, there is already the Minamata convention which came into force in August which will limit the use of mercury in many products from 2020, but it does not prohibit international trade in the toxic metal.

The study focused on women aged between 18 and 44, because they are more at risk of contamination. The UK Standard Food Agency advises pregnant women, those trying to conceive and children not to eat shark, swordfish, marlin and tuna, as these predators have very high levels of mercury.

The results of the study showed that already in the Pacific islands, far from all industrial sources of mercury pollution, 86% of women it had exceeded the safety limit of 1 ppm, three times.

Top 1ppm of mercury, brain, heart and kidneys are seriously compromised, considering that the fetus can suffer damage as low as 0,58 ppm.

We talked about the consequences of mercury on the body here:

The month of birth influences diseases: those born in May are healthier ❯

add a comment of Mercury that poisons women and children. The countries with the highest risk of contamination