Have you ever wondered how homeless women deal with menstruation? Just thinking about them, the young Brazilian designer Rafaella de Bona Gonçalves has designed biodegradable tampons in banana fiber, called Maria, which can be used in any condition, even by those who do not have a fixed home.

I ecological tampons they are available in roll form, like toilet paper. To form a tampon, the woman simply has to unroll a segment, separate it and roll it up. In addition, they are also very practical because you can vary the size, easily adapting it according to your need for menstrual flow. A hygienic, functional and universal solution in tune with the planet. 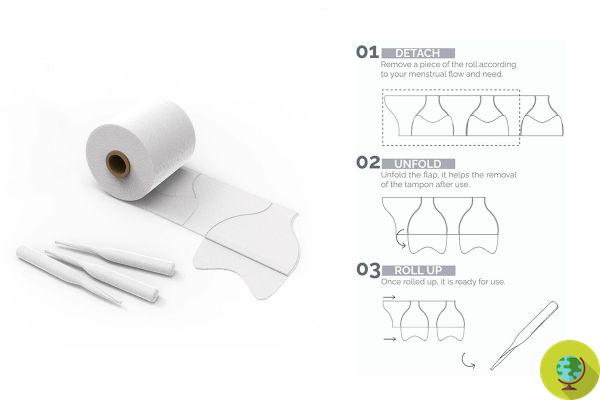 Gonçalves designed Maria in 2019 while participating in a course focused on finding concrete solutions that would help achieve one of the United Nations' 17 Sustainable Development Goals. She chose the first: to end poverty in the world in all its forms, and she did so by focusing on the problems of the homeless.

“It was then that I ran into women's problems on the streets. As a woman, who menstruates every month, I never stopped to think about how they go through this period ”, confesses the Brazilian designer.

The same year, his project earned him a prestigious award, winning the IF Design Talent Award 2019.

When we talk about menstrual poverty, we are not referring only to the difficulty of accessing sanitary devices - such as sanitary pads, tampons or cups - but to the whole: from drinking water, to soap and other elements necessary for the care of one's own health. Unfortunately this is a reality that affects many women around the world, forced to choose between food or a product for intimate hygiene.

We recently applauded the decision taken in some parts of the world - such as in Scotland, schools in New Zealand, Sri Lanka and Michoacán (Mexico) and universities in France - to distribute sanitary pads and / or tampons to women free of charge.

Aware of the impact of these disposable devices on the environment, Rafaella's invention - which she would like to be adopted and distributed by the Brazilian government (and not only) - represents a sustainable alternative for all those women who are comfortable with this type of device.

Being a woman is not a luxury and access to menstrual hygiene is not a privilege, it is a right.

add a comment of Menstruation, these biodegradable tampons made from banana scraps reduce waste and help poorer women