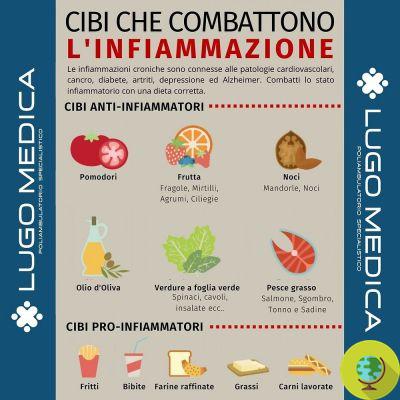 According to a study conducted in Molise, the Mediterranean diet is able to lower "inflammatory markers" and protect us from certain diseases

We have repeatedly talked about the benefits of Mediterranean diet, made mostly of whole grains, legumes, fruit and vegetables. This diet would be useful not only to prevent heart attacks and to ward off Alzheimer's and dementia but also to lower chronic inflammation and therefore to protect us from all those diseases that develop on an inflammatory basis.


According to a research conducted in Molise on 25 thousand people by scientists from the Mediterranean Neurological Institute of the IRCCS Neuromed of Pozzilli and published in the journal Blood, the Mediterranean diet would be able to keep the number of platelets and leukocytes within the normal range or lower it a little'.

Why is this particularly important? There scientific explanation provided by Giovanni de Gaetano, Head of the Department of Epidemiology and Prevention at IRCCS “Silent or subclinical inflammation is a chronic condition to which we are all more or less exposed. We are not talking about acute phases, such as flu or pneumonia, but rather a silent state in which we all, to varying degrees, find ourselves. This inflammatory state is generally detected by analyzing the level of some markers, such as C-reactive protein, or even the number of platelets and white blood cells (leukocytes) in the blood. But if an association with diet had been reported for the C reactive protein, for leukocytes and platelets no one had yet tried to test whether there was a direct relationship with what we eat every day ".

In particular the most useful foods ad lower "inflammatory markers" they would be, according to the study, fruit (including tomatoes), leafy vegetables, olive oil, legumes and cereals. Analyzes showed how it would have beneficial health effects in particular fibers and antioxidant principles contained in typical foods of the Mediterranean diet.

- Mediterranean diet: the secret to living a long time

- 11 foods that can counteract inflammation

add a comment of Mediterranean diet: lowers inflammation and protects against disease