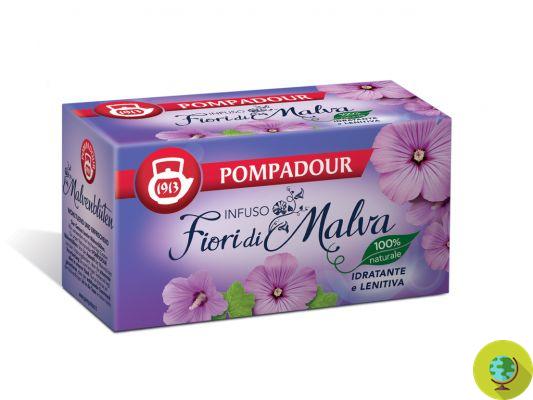 How to prepare the perfect mallow herbal tea


The flowers and leaves of mallow (Malva silvestris) are an excellent natural remedy to prepare herbal teas beneficial to health. In fact, they can be obtained with mallow infusions e decoctions curative. Let's learn how to best use mallow to enjoy its many benefits.

We had already talked about the main ones to the healing properties and benefits of mallow, a real panacea for health that is used by folk medicine and herbal medicine above all for the preparation of herbal teas in the form of infusions and decoctions.

How to prepare mallow herbal tea

We can prepare the mallow herbal tea in the form of an infusion or decoction. Both fresh and dried leaves and flowers are used for the mallow. You can collect fresh mallow, perhaps grown by you in the garden or in pots, or buy mallow herbal tea at a herbalist's shop, loose, composed of dried mallow, or in sachets.

To learn more about the benefits, uses and methods of administration of the mallow herbal tea based on your health conditions and the problem you would like to take care of with this natural remedy, ask your trusted herbalist for more information.

You can let both the infusion and the mallow decoction cool and use it as a mouthwash especially in the case of red and inflamed gums to relieve discomfort. Mallow is among the natural remedies that you can use even in pregnancy.

To prepare a cup of mallow infusion you will need:

Bring 250 ml of water to a boil in a saucepan. Pour the water into a cup where you have already added 2 teaspoons of dried mallow or 1 sachet of mallow for infusions. Let it rest for 10-15 minutes, strain, sweeten if needed and drink.

To prepare a cup of mallow decoction you will need:

In a saucepan pour the water and the fresh mallow. Bring to a boil and simmer for 10 minutes. Turn off the stove and let the decoction rest for 15 minutes. Then filter the liquid obtained to eliminate the leaves and mallow flowers and drink your decoction.

Mallow herbal teas they have no particular contraindications. Yours herbalist of trust will be able to give you more information on doses and administration of natural remedies based on mallow. To learn more, we suggest reading the following texts:

MALVA: HEALING PROPERTIES, BENEFITS AND HOW TO TAKE IT

5 HERBS AND PLANTS THAT CAN BE USED IN PREGNANCY

add a comment of Mallow: herbal teas, infusions and decoctions