Mallow: healing properties, benefits and how to take it

The properties and benefits of mallow, a spontaneous herb that can be used as a remedy for various small daily problems


La mallow (Malva silvestris) is a herbaceous plant with important beneficial properties. It is part of the Malvaceae family. It is used both in nutrition and for the preparation of herbal remedies.

We can find mallow in the meadows and on the edges of cultivated fields in the plains or buy mallow seeds to grow it in pots or in the garden. The term mallow derives from the Latin and is linked to the term 'soft' for its ability to soften. The main ones properties of mallow they are the emollient ones.

Mallow has emollient and calming properties. It is mainly used for relieve inflammation mucous membranes. It also has laxative effects and is beneficial for the eyes due to its anti-redness properties.

Le properties of mallow they are mainly enclosed in its flowers and leaves. The flowers and leaves of mallow are used as food and as a natural remedy. Mallow has laxative properties useful to exploit in case of constipation. The mallow, in fact, contains mucilages that stimulate the contractions of the intestine and facilitate the removal and expulsion of toxins from our body.

The mallow has emollient properties that work both from the inside (with particular reference to the stomach and intestines) and outside, thanks to the application of packs of mallow infusion on the eyes or skin or by adding the infusion or decoction of mallow water for the bath or the foot bath.

Mallow infusions and decoctions are used in folk medicine such as anti-inflammatory remedy for the urinary tract in case of minor problems from this point of view. Mallow also has purifying and expectorant properties, useful in case of cough and accumulation of mucus in the respiratory tract. Collecting the mallow for the preparation of natural remedies occurs in spring.

Mallow has no details contraindications, since it is among the natural remedies that can also be used during pregnancy. 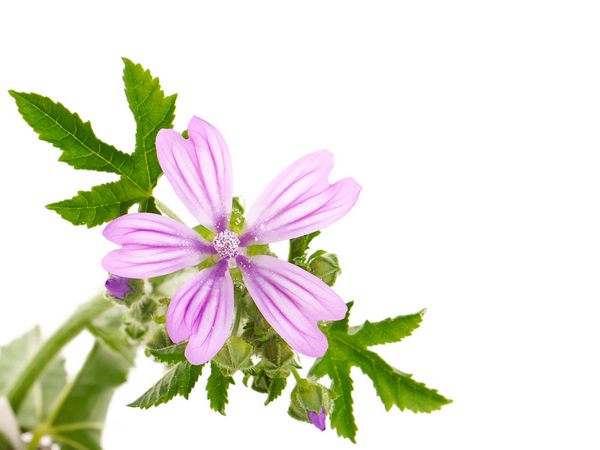 How to take mallow

of mallow both the flowers and the leaves are used as a natural remedy for preparation of infusions or decoctions and as ingredients in the kitchen. Usually fresh mallow is used in the kitchen while dried mallow is used for the infusions, which you can find in herbalist's shops and natural products stores.

Mallow in the kitchen

Se we grow mallow or we have the possibility to collect it we can have fresh mallow flowers and leaves to use in the kitchen as a simple addition to salads or to flavor dishes. Fresh mallow flowers and leaflets along with other edible herbs and flowers can become part of light seasonings for risotto or filling for homemade pancakes. THU find the recipe for mauve pancakes. You can also add a few leaves of mallow in yours soups.

The benefits of mallow herbal tea

La mallow herbal tea is recommended as calming and relaxing drink to be taken in the evening to relax and sleep better but also after meals as a natural digestive. To prepare the mallow herbal tea in the form of an infusion, pour 2 teaspoons of dried mallow into a cup, add 250 ml of water brought to a boil and left to cool and let it rest for 10-15 minutes, then filter and drink the liquid. obtained in doses of one or two cups a day.

Finally, the herbal mallow is used for the preparation of Dietary Supplements useful for promoting the proper functioning of the intestine. These are food supplements based on flowers and mallow leaves that exploit their soothing and emollient properties to promote gastrointestinal functions and to reduce swelling problems. You can find mallow-based supplements in pharmacies or herbalists, where you can ask for more information on their use.

FRITTERS AT ZERO COST: 10 RECIPES WITH FLOWERS AND WILD HERBS

add a comment of Mallow: healing properties, benefits and how to take it