Magnesium, better than drugs for anxiety and depression 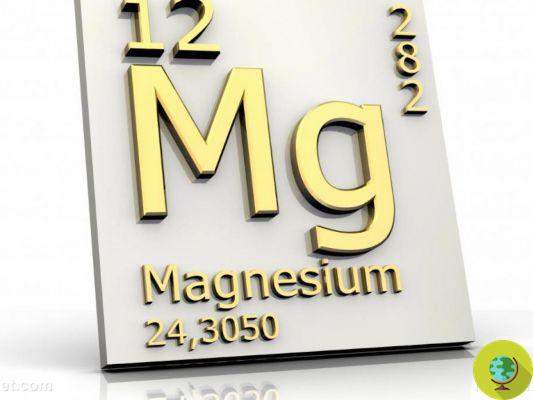 Magnesium, a particularly important mineral for our body, capable of acting positively on the nervous system and the brain, among other things. Research has highlighted the benefits of a little supplementation of this substance against depression.

Magnesium, a mineral that is particularly important for our body and is able, among other things, to have a positive effect on the nervous system and the brain. A research has highlighted the advantages of a small integration of this substance against the trough.


Millions of people around the world today suffer from depression, a modern disease which has many negative effects and implications on the social and emotional life of those affected and which can be treated in different ways. A study published in Plos One shows that simple over-the-counter magnesium supplementation can be effective (as well as safe) in treating mild to moderate depression.

Leading the research is Emily Tarleton, of the University of Vermont's Clinical Research Center, who and her colleagues conducted a clinical study involving 126 adult US patients (average age 52) attending primary care clinics. Participants were divided into two groups: the first was advised to take over-the-counter oral magnesium tablets for the treatment of moderate depression (specifically, it was 248 mg of magnesium chloride to be taken every day for six weeks), the the second group, on the other hand, was the control group and did not receive any treatment.

Assessments of the course of depressive symptoms were conducted on all participants every two weeks. The results obtained showed that magnesium is safe and effective and comparable to the drug treatments that are commonly prescribed in these cases. In fact, analyzing the data, in 112 participants, magnesium intake produced a clinically significant improvement in symptoms of depression and anxiety regardless of age, gender or other factors.

The supplement, among other things, was well tolerated by the participants.

“This is the first randomized clinical trial to examine the effect of magnesium supplementation on depression symptoms in US adults. The results are very encouraging, given the great need for further treatment options for depression, and our discovery that magnesium supplementation provides a safe, fast and cost-effective approach to depressive symptom control. " said Dr. Tarleton.

It is only now to be understood whether these results would be the same even in a larger and more diversified population sample. Therefore, more studies are needed to confirm this ability of magnesium against depression. In the meantime, however, we can increase the daily doses of this mineral by putting foods rich in magnesium on the table more often or, on the advice of an expert, take a magnesium supplement at the first symptoms of anxiety or depression.

Let's also remember that the powerful nutritional benefits of magnesium will also bring benefits to cardiovascular health, that of the kidneys, bones and much more.

Magnesium: because it is essential for the immune system and essential in the fight against cancer ❯

add a comment of Magnesium, better than drugs for anxiety and depression