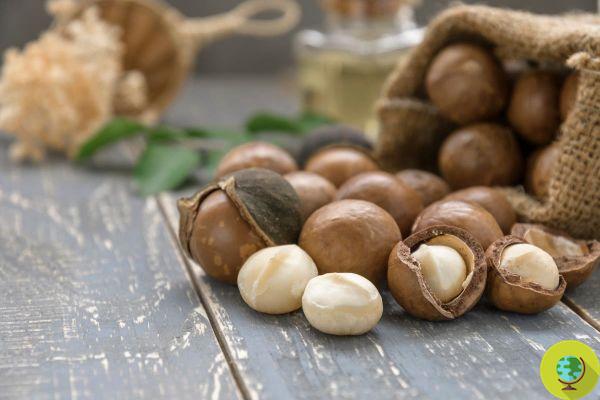 Macadamia nuts also ended up on the infamous IUCC Red List, which indicates species at risk of extinction

also the nights of Macadamia have ended up on the infamous Iucn Red List, which indicates species at risk of extinction. This was revealed in the latest update that the macadamia nut, a type of dried fruit, is now threatened with extinction in the wild. And the causes are also known, from the presence of invasive “alien” species to habitat loss and climate change.


Good, rich in fiber and vegetable fats, these nuts help protect the heart and arteries, reduce bad cholesterol and increase the good one. But soon we will be able to say goodbye to them and the fault is ours alone.

Unfortunately, the latest IUCN update revealed that several plants have been included in the red list, classified in some cases as vulnerable, in others as endangered. In particular, the analysis focused on the protea family of which one of the most complete evaluations was made.

It emerged that 45% (637 species out of 1.464) of these extraordinary flowering plants that grow mainly in the southern hemisphere are vulnerable, endangered or critically endangered. They are prone to the spread of invasive alien species, changes in natural cycles, man-made fires and ultimately climate change and habitat loss for agriculture.

The protea family includes three species of Macadamia - the same ones that produce the nuts of the same name - which entered the IUCN Red List because they are threatened with extinction in nature. In particular, the macadamia nut (Macadamia integrifolia) is listed as Vulnerable, while the M. ternifolia and M. tetraphylla are considered endangered.

The macadamia nut is now threatened with extinction in the wild.

Invasive alien species, habitat loss and #ClimateChange are key threats to its protea family, according to the latest @IUCNRedList update https://t.co/Ib71iIrQ1Z pic.twitter.com/BNqniqG2mm

Unfortunately, these are not the only plants that are disappearing and for this reason they have been listed in the latest Iucn update. A detailed analysis was also conducted on oaks and nearly a third (31%, 113 out of 430 species) is threatened with extinction. Nine Asian oaks enter the IUCN Red List already critically endangered (possibly extinct or possibly extinct in the wild). The largest number of threatened species are found in China and Mexico, Vietnam, the United States and Malaysia. Again, deforestation related to intensive agriculture is the most common threat in China, Mexico and Southeast Asia while invasive alien species, disease and climate change are the main threats to oaks in the United States.

But the IUCN bulletin also gave us some good news: the European bison (Bison bonasus) is recovering, going from 'vulnerable' to 'near threatened' thanks to the numerous conservation efforts of the species.

Grandmothers have a scientifically beneficial side effect on their grandchildren ❯

add a comment of Macadamia nuts now face extinction in the wild. Inserted in the IUCN Red List