Lyme disease: what it is, symptoms and treatments

Lyme disease is a tick-borne infection. What are the symptoms and how to treat them.

La Lyme disease or disease or Borreliosis it's a'tick-borne infection which mainly affects the skin, joints, internal organs and possibly the nervous system. Today there is a lot of talk about it because the famous American model Bella Hadid and her mother Yolanda Foster were affected by it, who have enclosed their experience in a book. But what what specifically is Lyme disease? And what are the cycle?

What is Lyme disease

La Lyme disease o Borreliosis (the pathogen is Borrelia), which takes its name from the homonymous American town where the first case was described in 1975, is more common than one thinks, so much so that it is considered the most frequent human disease transmitted by ticks.

It is a pathology of bacterial origin which mostly affects the skin, but can also affect internal organs, joints and the nervous system. It is part of the group of anthropozoonoses, that is to say of that group of diseases that can be transmitted from vertebrate animals to humans: the carrier of the infection, in fact, are ticks, which become infected by biting a sick animal, can transmit the infection in humans.

READ also: TICKS: HOW TO ELIMINATE THEM IN THE SAFE WAY?

Ticks are gods bloodsucking parasites that live on the skin of the animal, to which it attaches itself through its rostrum. By sucking the host's blood, they swell and then become adults and release many eggs on the ground, thus giving life to a new cycle.

They can infest at any time of the year, but they are more frequent from spring to autumn, when the climate is hotter and wetter. All dogs can be interested, but especially those who frequent wooded areas, where the presence of wild animals is greater (we can therefore include hunting dogs in this category).

Lyme disease is mainly caused by the bacterium Borrelia burgdorferi sensu striato, which is present in Europe and is the only agent of infection in North America. But there are also Borrelia afzelii and Borrelia garinii, which are instead found in Europe, Asia and Africa. The main vehicles of infection can be, in addition to dogs, also wild animals such as rodents, roe deer, deer, fox or hare.

What are the symptoms of Lyme disease 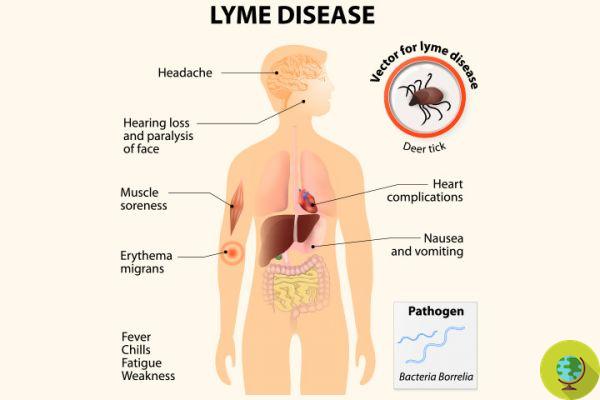 Lyme disease does not necessarily manifest itself immediately with particular symptoms: the incubation period varies from 4 to 25 days and in general onset with chronic migrating erythema, that is one red spot which, in a variable period of time, can enlarge to become a huge circular-oval or even triangular spot. Fever, muscle aches, tired body, headache and stiff neck are often added to the erythema. In the worst case, even heart pain, joint pain or neurological problems.

How is Lyme disease treated

For the therapy one necessarily resorts to the antibioticsbut for Lyme disease to be effective it must be diagnosed early.

Generally, in the milder stages, we resort to Amoxicillin for a period ranging from one to three weeks, or penicillin or erythromycin in case of allergy to the drug. If the disease is in a more advanced stage, however, also i corticosteroids.

add a comment of Lyme disease: what it is, symptoms and treatments