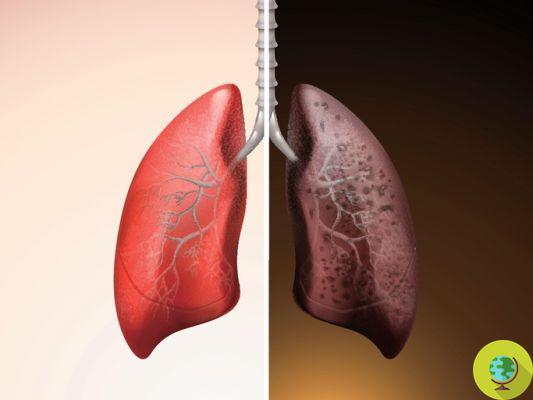 In Eastern wisdom, the breath is considered as the unit of measurement of the duration of our life, which should not be calculated in days and years, but in inhalations and exhalations. In this light, it is even more important to learn to listen to the signals of your body to identify those symptoms that could indicate that the lungs are near a risk area.

Il lung cancer it is one of the diseases of the respiratory system that we tend to discuss the most and that inspires the most fear. It is in fact one of the major causes of death worldwide, alongside ictus ed infarct. However, there is another disease, less well known in the media, which can seriously damage the lungs and cause a very high percentage of deaths, so much so that it is now considered the fourth cause of death both in Europe and in the United States. It is called chronic obstructive bronchopneunopathy (COPD).

COPD is caused by combination of two factors: emphysema and chronic obstructive bronchitis. Mostly i smoking, but the abuse of cigarettes, although currently considered one of the major triggers of the disease, is flanked by other elements, such asexposure to lung irritants, including the silicon or asbestos fibers. The pollution of the air we breathe every day is certainly not a good ally for our health. both in the case of external air, full of smog and fine dust, and in internal environments, where it can be caused by the presence of electrical equipment, stoves or air conditioners.

In oriental wisdom, the breath is considered as the unit of measurement of the duration of our life, which should not be calculated in days and years, but in inhalations and exhalations. In this light, it seems even more important to learn how to listen to your body's signals to identify those symptoms that could indicate that the lungs are near a risk area.

Here are some tips to recognize them and decide, at least as a precaution, to consult your doctor in base as recommended by Dr. Byron Thomashow, professor at Columbia University and director of the COPD Foundation, which specializes in the study of broncopneumopathy, and by Dr. Norman Edelman of the American Lung Association.

This is the most easily overlooked symptom, as it is frequently attributed to advancing age. It should instead be strictly taken into account especially in the case of the sensation of not being able to breathe well shows up not only after a particular effort, but in the normal course of their daily activities. If you realize you are no longer able to breathe in deeply, it is necessary to undergo a specific check to verify the causes of the situation.

If you find yourself constantly struggling with one cough which does not seem to have any intention of ceasing and which is not accompanied by the typical ones cold symptoms, it's time to talk to your doctor. The apparently unmotivated appearance of one annoying and continuous cough it should not be underestimated, even more so if you are a smoker or have been for a long time in the past. COPD causes inflammation of the lung alveoli. It will cause more mucus to build up, which the body will try to excrete by coughing.

Waking up in the morning with an annoying headache could indicate that during the night, while you sleep, your lungs are unable to inhale and exhale the air deeply enough to cause a buildup of carbon dioxide in the body. can cause brain blood vessels to dilate, causing pain.

Swollen ankles and feet may indicate that your circulatory system is not receiving the correct supply of oxygen necessary for the organs to which blood is being led to function. We speak in particular of liver and kidneys, responsible for the expulsion of toxins and excess fluids, which otherwise accumulate in the body causing swelling.

The malfunctioning of your lungs could haunt your sleep or make you sleepless. You may find that you need to use more pillows in order to breathe better or prefer to fall asleep in the chair. During sleep, you may experience apnea episodes if you fall asleep in an uncomfortable position. If this happens to you, stay alert and notify your doctor.

Among the secondary symptoms of COPD is a change in the shape and posture of the chest. Due to a chronic inflammatory process, the lungs enlarge and push the diaphragm downwards, making it difficult for it to function and move correctly in the respiratory act. Those affected by it, when they are seated, unconsciously try to improve their respiratory conditions, for example by leaning their torso forward and placing their hands on their knees.

Nails and lips can be affected by the phenomenon of cyanosis if the level of oxygen carried by the blood towards the extremities of our body has dropped below normal. This could be a sign that the lungs are having difficulty getting enough oxygen, one of the symptoms of COPD. The level of oxygen in the blood can be quickly measured with the equipment available to your doctor.

Pneumonia: the 15 symptoms not to be underestimated ❯

add a comment of Lungs: 7 alarm bells for smokers