Lovers of sweets get less fat. The secret in a gene 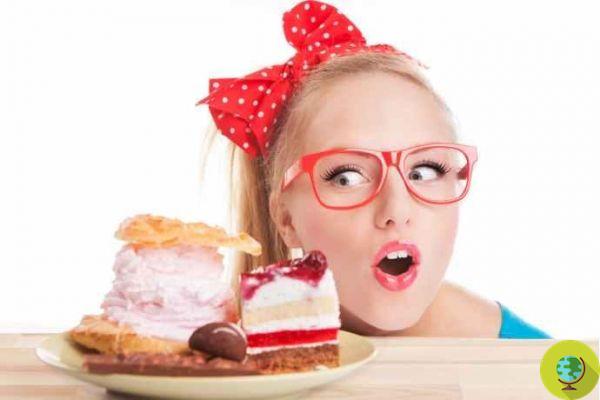 The particular variant of a gene would cause less fat to accumulate in those with a passion for sweets.

Greedy to the rescue! Those who love sweets more would have a tendency to gain less weight and the credit would go to a gene. In fact, lovers of sugary foods would accumulate less fat thanks to the variation of a gene responsible for a lower tendency to increase fat. But you shouldn't overdo it anyway!


This is what emerges from a study conducted by the University of Exeter, in the United Kingdom, which highlighted the variation of a gene, the so-called “FGF21”, linked precisely to the passion for sweets.

Already in 2013, the genetic variant of the FGF21 gene - an allele present in 20% of the European population - was found to be linked to a greater propensity for foods rich in carbohydrates (sugars), such as pasta, bread, alcohol and sweets. For this reason, the scientists of the Medical School of the English university have decided to thoroughly investigate the effects of the different variants of this gene, paving the way for the possible development of drugs capable of combating diabetes and obesity.

By analyzing data from 500 British citizens included in the UK Biobank, a database aimed at encouraging the prevention, diagnosis and treatment of certain diseases by providing data for population-based research, the researchers found many associations between the presence of the gene and the state of health of people.

"We were surprised that the version of the gene associated with consuming more sugar is associated with a reduction in body fat," says Timothy Frayling, a molecular geneticist at the University of Exeter and first author of the study he looked at. parameters targeted, especially weight, blood pressure, body fat distribution. The fact that surprised him the most was precisely the lower body fat in the presence of the common genetic variant of FGF21, that of type A.

“This contrasts with the current perception that eating sugar is bad for your health. It can reduce body fat because the same allele also leads to a lower consumption of protein and fat in the diet, ”added Frayling.

But these aren't the only data the researchers found. The hormone FGF21, which is produced mainly in the liver, has multiple functions: it acts on the hypothalamus of the brain to suppress the intake of sugar and alcohol, stimulates the updating of glucose by the fat cells and acts as a sensitizer of the insulin. The analysis showed that although the "A version" of the FGF21 gene leads to a higher consumption of sugars and alcohol, it is also associated with higher blood pressure and a higher waist-to-hip ratio.

In practice, even if a lower percentage of body fat is recorded, that detected is concentrated mainly in the abdominal part instead of on the buttocks, thighs and hips, and could therefore be even more harmful to health. In addition, albeit slightly, those with this genetic variant have on average a higher blood pressure.

What is the purpose of this study then? Certainly, the authors say, it is useful to discover some genetic and biological aspects of obesity, starting from the analysis of the different variants of FGF21. Meanwhile, we? We do not exaggerate with sugars and always pay attention to our diet. Remember that a balanced diet is essential to avoid running into health problems.

Friends are chosen with the help of DNA ❯

add a comment of Lovers of sweets get less fat. The secret in a gene