Locanda dei Girasoli, shameful theft: pc and printers taken away from the down boys 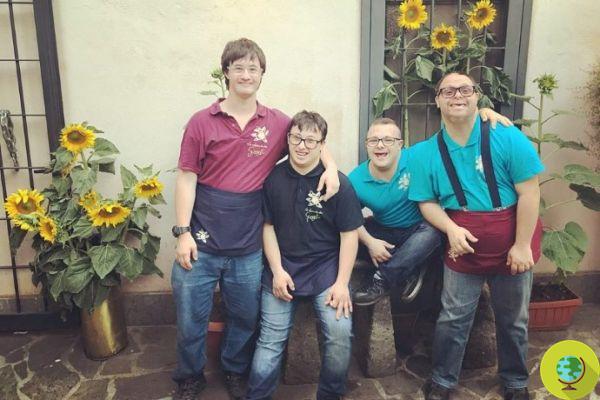 The Roman restaurant where children with Down syndrome work has suffered a theft.

A news that has the ignoble: the Locanda dei Girasoli in Rome, the restaurant run by Down boys, has been hit by a theft: some people not yet identified have sneaked into the Tuscolano restaurant taking away computers, printers and the collection the previous evening for a value of about 2 thousand euros.


The restaurant is not just a restaurant, but one of those emblematic places of social integration. La Locanda dei Girasoli opened in 1999 and since then Down or autistic children have followed one another in their work.

Since 2013, with the help of other social enterprises, a real process of relaunching and reorganizing the Cooperative has begun which has greatly increased the activity of the restaurant and above all has led to a visibility of the project both nationally and internationally, which however it does not have the same positive impact on the accounts.

In fact, a petition is currently active because the place is at risk of closure: management costs are high and the area would not facilitate the arrival of new customers, the "location of the place is absolutely inadequate, it is located in a peripheral and residential area , with an objective difficulty of accessibility ".

And now another hard blow is looming on this magnificent place, an example that it is possible to achieve everything, really everything, with obstinacy and good will.

“Not even this episode will take away our joy”, they say from the Locanda. And we wish these guys all our best wishes!

Remember that it is possible to help them by signing the petition on Change addressed to the Mayor of Rome Virginia Raggi because "among the many buildings of the Municipality, you will find an adequate proposal to give continuity to this project of work and autonomy for our children", it says.

Locanda dei Girasoli, hopes are rekindled to save the symbol of social inclusion ❯

add a comment of Locanda dei Girasoli, shameful theft: pc and printers taken away from the down boys