Let's make soup, not war: the Ukrainian chef asks us to prepare all the typical borscht, here is the recipe

Even a typical dish can be a sign of peace and relaxation: hence the appeal of one of the most important Ukrainian chefs, Ievgen Klopotenko 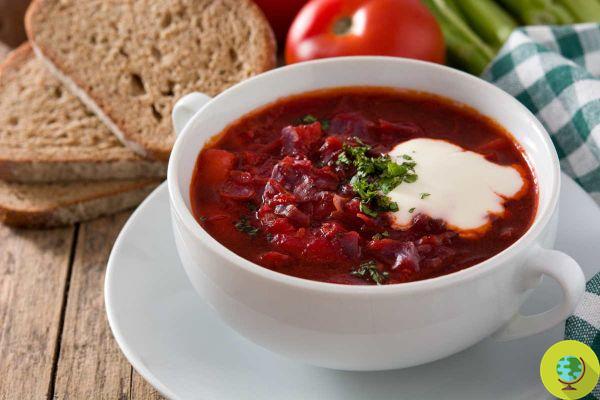 The act of sitting down at the table and sharing food has always been a sign of relaxation. Why not transform this gesture into an invitation to make peace in these days of so bitter conflict? It is the appeal he launches Yevgen Klopotenko, 35, one of the most renowned Ukrainian chefs in his country, winner of the local edition of the Masterchef cooking program and included in the 50 Next list dedicated to future talents in the kitchen.

His starred restaurant, in the bleeding heart of Kiev, has been transformed into a refuge for civilians from the fury of the bombings. Its kitchen offers hot meals to soldiers and volunteers who are bravely resisting the Russian advance into the city, despite the shortage of food supplies. But Klopotenko asks for help from international chefs, from all of us to save Ukraine: to cook typical dishes of his country, such as borscht or the baked cheescake from Lviv, it is a way to be close to the suffering Ukraine, to immerse yourself in its culture and traditions.

To foreign friends, cook Ukrainian dishes - writes it Head in a heartfelt post on Instagram. - I believe that cooking food can release good energy and a strong inner connection. […] You know all about the war in our land, but try to go further and get to know us better. What is our strength? Why are we fighting so much for our country? Why do we love Ukraine so much? What historical and cultural symbols are behind every Ukrainian? Start with the flavors of our typical dishes. Then, if you want to know more, continue with our music, information about our writers, national myths and so on. But to begin with: cook, taste, perceive and share.

In support of the campaign, the chef also launched a hashtag: #MakeBorschtNotWar. Anyone in the world who prepares this soup will be able to share a photo of it on their social channels and thus help spread the Ukrainian culture.

The borsch: the typical Ukrainian soup made with beetroot

Borsch is one of the cornerstones of traditional Ukrainian cuisine: it is one soup prepared with winter vegetables - red beets, cabbage, onions, potatoes, carrots - and occasionally enriched with meat (beef, lamb or pork, but also chicken or turkey): as always happens with ancient recipes, there is no single recipe, but every family jealously guards its secrets. Despite its origins that are lost in the past, it is not a humble or poor dish: borsch is still served today on special occasions, such as weddings and parties.

The main ingredient for this recipe is beetroot, which gives the soup an intense color and a creamy consistency: to speed up cooking times, we can use precooked beets (they are also easily found in our supermarkets) or cut the raw beets into small pieces and boil them before adding them to the rest of the ingredients.

Also very important for this recipe are the spices,: bay leaf, garlic, dill, allspice and black peppercorns, as well as salt and sugar (to counterbalance the taste); for a spicier flavor, you can also add a few tablespoons of adjika, a spicy sauce of Georgian origins. Below you will find the recipe of chef Klopotenko, which we offer in a vegan version:

Easy to say palm oil: let's get to know it better to really defend ourselves ❯

add a comment of Let's make soup, not war: the Ukrainian chef asks us to prepare all the typical borscht, here is the recipe