Labyrinthitis is an inflammation of the inner ear called a labyrinth. This disorder creates very annoying symptoms such as loss of balance, dizziness and more. We know better the causes of labyrinthitis and the possible natural remedies.

Labyrinthitis is an inflammation of the inner ear called labyrinth. This disturbance creates symptoms very annoying such as loss of balance, dizziness and more. We know better the causes that cause labyrinthitis and possible remedies.


Labyrinthitis it is a disease to be seriously considered although, well treated and kept at bay, it usually does not have serious consequences. On the other hand, in cases where the ear is damaged by inflammation, after a first acute phase that lasts a few days, it generally passes to an intermediate phase with attenuated symptoms and finally the problem can remain in place. chronic manner for months or years in which the symptoms cyclically return to be felt.

Labyrinthitis it can affect only one ear or both. The most frequent symptoms it causes are loss of balance, spinning sensation, sensitivity to light, tinnitus and in the most serious cases even hearing loss.

Undoubtedly the most difficult symptom to manage are the dizziness which can also become very strong and impair normal daily activities. Then there is a general sfeeling of lightheadedness often accompanied by nausea and vomit, sweating, paleness and general malaise.

Often the symptoms of labyrinthitis carry with them as an additional side effect one feeling of anxiety and depression. They are in fact not rare panic attacks in those who suffer from an attack of labyrinthitis. 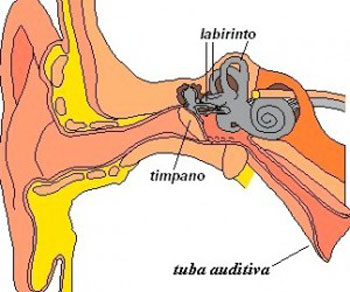 The causes of labyrinthitis have not yet been fully clarified although it is thought they may be related to the presence of viruses or bacteria that have directly affected the ears (for example in case of otitis or mumps) or the upper respiratory tract then coming to give problems also to the labyrinth.

However, it is not excluded that labyrinthitis may also appear following very stressful situations or as allergic reaction to taking certain medications or due to ear surgery.

Among the viruses that can cause labyrinthitis are the cytomegalovirus, those of exanthematous diseases such as chicken pox, measles and rubella, herpes virus but also that of the flu. As for bacteria, however, it is often involved cyanobacteria or other species of streptococcus or staphylococcus although they could also cause Escherichia coli and in very rare cases mycobacterium tuberculosis or meningitis.

As already mentioned, labyrinthitis is an inflammatory disease not to be taken lightly to avoid irreversible consequences such as ear damage, chronic disease and even, in severe cases, hearing loss.

We therefore advise you to promptly contact your doctor at the first suspicious symptoms to evaluate the possible presence of labyrinthitis and immediately start a therapy based on anti-inflammatory drugs, antibiotics (if of bacterial origin) or other to be evaluated case by case.

Unfortunately when labyrinthitis is present natural remedies can only be collateral to the use of traditional drugs and in any case must be calibrated on the advice of an expert. Good results are obtained, for example, with plantar reflexology which is able to act on the ear area by massaging some specific points.

add a comment of Labyrinthitis: Symptoms, Causes and Remedies