L-theanine: what it is, what it is used for, benefits and side effects of the amino acid in green tea 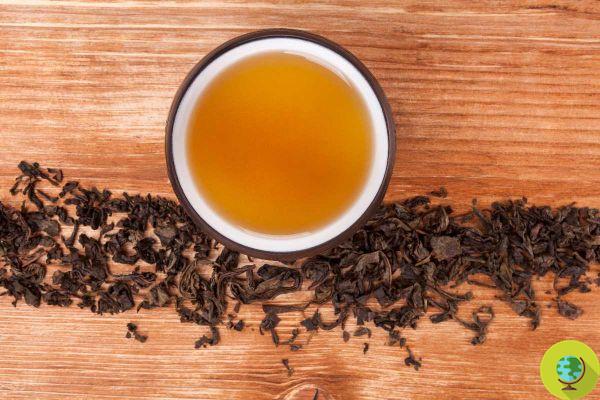 L-theanine is an amino acid found mainly in green tea, black tea and some mushrooms. Let's find out the health benefits

L-theanine is an amino acid found mainly in green tea, black tea and some mushrooms. Let's find out the health benefits

La L-theanine it is an amino acid with great benefits for the health of our body. It is said to help relieve anxiety, stress and reduce insomnia. Let's find out all its properties together, as well as any risks and side effects.

Benefits and Uses of L-Theanine

This amino acid is known for its relaxing properties, but it also has many other benefits. (Read also: Green tea: a natural concentrate of antioxidants)

Sipping on a cup of hot tea can help you relax, and there is search suggests that it not only relaxes the mind, but also does so without causing sleepiness.

In a review of five randomized trials, which included 104 participants, four studies linked L-theanine to reduced stress and anxiety in people experiencing stressful situations. Another study published in the Journal of Clinical Psychiatry focused on people suffering from schizoaffective disorder and L-theanine was found to reduce anxiety and improve symptoms of schizophrenia.

Combined with caffeine, L-theanine can help increase concentration and attention.

Some research suggest that L-theanine might improve immune system function. A study published in the journal Beverages also found that it could help reduce upper respiratory tract infections.

Another study found that the catechins green tea, which has antioxidant properties, and theanine may be effective in preventing the flu. Another study found that this substance could help improve inflammation in the intestinal tract. However, more research is needed to confirm and expand these findings. (Read also: Drinking a cup of tea a day prevents senile dementia)

L-theanine has also been associated with the amplification of anticancer effects of some chemotherapy drugs. Because of these results promising, the researchers expect this may also help improve chemotherapy's ability to fight cancer.

Although there is no definitive evidence to show that tea prevents cancer, a number of studies suggest that people who regularly drink this beverage have lower rates of cancer.

Researchers of one study in China they also found that women diagnosed with ovarian cancer, who drank at least one cup of green tea a day, lived longer than those who did not. Another study who surveyed tea drinkers versus non-drinkers found that women who drank green tea were 32% less likely to develop the pancreatic cancer.

L-theanine can be useful for those suffering from increased blood pressure, especially in stressful situations.

Uno study found this amino acid helped reduce blood pressure in those suffering from high blood pressure; in the same study, the researchers noted that caffeine had a similar, but less beneficial, effect.

The researchers found that doses of 250 mg and 400 mg of L-theanine significantly improved sleep in some patients. Additionally, 200 mg of L-theanine has been shown to help reduce resting heart rate, indicating its ability to promote relaxation. L-theanine may also help teens diagnosed with attention deficit hyperactivity disorder (ADHD) sleep better.

Uno study examined the effects of L-theanine on 98 boys between the ages of 8 and 12. A randomized group was given two 100 mg chewable tablets of L-theanine twice daily. The other group received placebo pills.

After 6 weeks, the L-theanine group had a longer, more restful sleep. While the results are promising, more research is needed before it can be proven safe and effective, especially for children. Other research suggests that L-theanine has improved sleep quality for people diagnosed with schizophrenia.

Risks and Side Effects of L-Theanine

There are not confirmed side effects or directed on the consumption of L-theanine. In general, it is safe to drink tea and take supplements that contain L-theanine.

However, although some research shows promising results for anticancer properties, teas that contain amino acids may have other ingredients that are harmful to people being treated for cancer.

According to the Memorial Sloan Kettering Cancer Center, the polyphenol EGCG present in tea green it can reduce the effectiveness of some chemotherapy drugs, such as bortezomib. For this reason, it is vital that those taking chemotherapy drugs speak to their doctor before drinking green tea.

Although no side effects have been reported from taking L-Theanine, due to the caffeine content, consuming large amounts of green tea can lead to:

Le pregnant or breastfeeding women they should also limit the amount of tea they drink to avoid excess caffeine. As for dosage, however, no conclusive research has been conducted, and no dosage recommendation is known. It is advisable to follow the general guidelines on caffeine consumption, and always consult your doctor.

Is the hipster beard a breeding ground for bacteria? ❯

add a comment of L-theanine: what it is, what it is used for, benefits and side effects of the amino acid in green tea