Ketchup: the recipe to prepare it at home 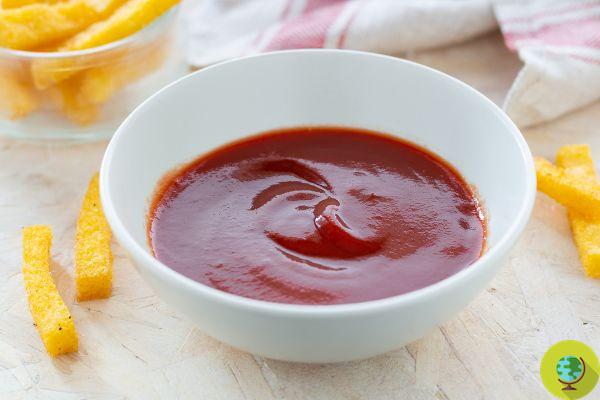 How to make homemade ketchup. Ketchup, here is a tasty sauce that is very simple to prepare at home, in order to avoid the purchase of prepackaged sauces that could contain unwanted dyes and preservatives. As summer approaches, you will have the opportunity to have fresh vegetables at your disposal for the preparation of tomato sauce. Starting from the homemade tomato sauce it is possible to obtain a tasty ketchup sauce to be prepared with the addition of a few ingredients.

Il ketchup, here is a very simple tasty sauce from prepare at home, in order to avoid buying prepackaged sauces that may contain unwanted dyes, artificial sweeteners, and preservatives.

As summer approaches, you will have the opportunity to have fresh vegetables at your disposal for preparation of tomato sauce. Starting from homemade tomato sauce it is possible to obtain a tasty ketchup sauce to be prepared by adding a few ingredients.

Il bittersweet taste of ketchup on the market it is obtained by adding refined sugar or industrial sweeteners, such as glucose syrup, which makes sauces containing it excessively sugary and caloric. For the home preparation of ketchup it is possible to replace sugar with some Maple syrup or agave, even better if organic and obtained according to processes that are as natural as possible.

A curiosity: ketchup is a sauce of Chinese origin which began to be produced in the United States at the beginning of the twentieth century. From that moment on, its diffusion has affected the whole world, with a real boom over the last few decades. Following this recipe will allow you to not having to buy ketchup anymore and to know exactly the ingredients it will contain, to the benefit of health.

The preparation of ketchup according to this recipe it does not require cooking. Your ketchup will certainly be healthier if the tomato sauce commonly on sale is replaced by tomato sauce biological o homemade starting with fresh tomatoes. All the ingredients indicated must be poured into a bowl and mixed with a spoon until a very homogeneous sauce is obtained.

For an even smoother texture, you can resort to using a mixer. It is advisable to add water little by little depending on the desired density for the ketchup. Of course, the quantities indicated for the preparation can be reduced according to your needs. The homemade ketchup sauce indicated here must in fact be freshly prepared and can be kept in the fridge for up to two days. For a longer lasting version of ketchup sauce you can refer to this recipe which, providing cooking, can be stored for a long time in jars.

5 ways to store tomatoes and enjoy them all year round

10 DIY sauces you won't have to buy anymore

How to make mayonnaise at home (classic and vegan)

add a comment of Ketchup: the recipe to prepare it at home