Kawasaki disease: what it is, symptoms and treatments

What specifically is Kawasaki disease? What are its symptoms and why is it so concerned now?

The warning issued by British pediatricians regarding the rare possibility of finding in children, as a side effect of Covid-19, the presence of severe inflammation, a vasculitis known as Kawasaki syndrome, is in the last hours. But what is specifically the Kawasaki disease? What are the symptoms of him?


In the UK, in recent weeks, a notice sent to doctors by the Pediatric Intensive Care Society reported that ICUs in London and other parts of the country were treating seriously ill children with unusual symptoms:

Coronavirus: A severe inflammatory syndrome, similar to Kawasaki disease, is affecting several children in the UK

At the same time, just today the confirmation of an increase in the appearance of Kawasaki disease in children in recent months arrived from the Pediatrics ward of Bergamo. To be attributed to the coronavirus:

Coronavirus, in children is increasing Kawasaki disease, the Bergamo study and the appeal of pediatricians

Let us then analyze the nature of this disease.

What is Kawasaki disease

Put simply, Kawasaki disease (KD) is one vasculitis, which is an inflammation of the blood vessels that tends to affect infants and children (most children with Kawasaki syndrome are between 1 and 8 years old, but infants and adolescents can also be affected).

It is essentially a 'inflammation of medium-sized vessels self-limiting feverishness (i.e. capable of spontaneous resolution without the necessary use of drugs) affecting the pediatric age. In severe cases, it can also be associated with coronary artery aneurysms (CAAs) which, if left untreated, can lead to death (usually heart complications begin in the subacute phase of the syndrome, approximately 1-4 weeks after onset) .

The disease is more common in children of Asian descent and can occur year-round, but more often in spring or winter. Furthermore, the onset of the disease has been shown to be 1,5 times more common in males than in females.

What causes Kawasaki disease is still unknown. But the clinical manifestations and data suggest the intervention of one or more infectious agents and the triggering of an abnormal immunological response in genetically predisposed children.

The disease begins with fever often above 39 ° C, which increases and decreases between one and three weeks. The eyes become very red and within 5 days, a red hives-like rash appears, often patchy, usually on the trunk, around the diaper area and mucous membranes, such as the walls of the mouth or vagina. The throat and tongue also become red (“strawberry red”), and the lips become split, red and dry.

Also, the region of the palms becomes red or purplish red and both the hands and feet can often swell. The lymph nodes in the neck also frequently enlarge.

This is accompanied by irritability, occasional lethargy and colicky abdominal pain.

In summary, the symptoms of Kawasaki disease are:

In addition, palms may appear on the nails (partial leukonychia), while the palms of the hands and feet may turn red and manifest a "glove" and "sock" edema. Towards the tenth day from onset, peeling of the skin of the fingers and the perineal region begins. 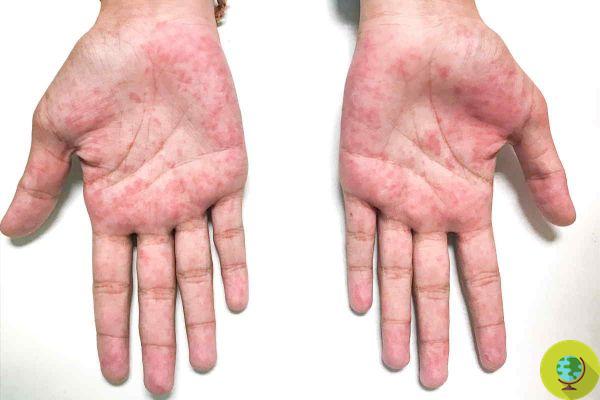 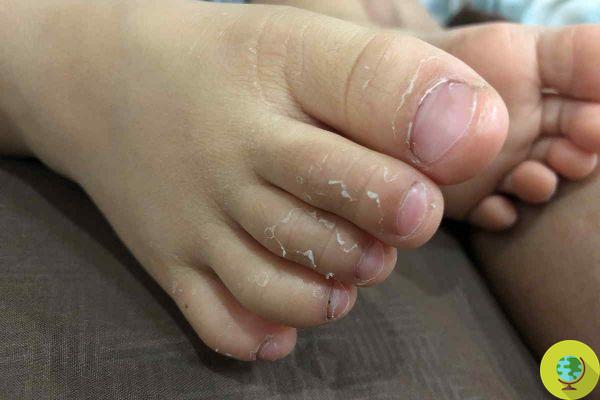 In most cases, the course of the disease is self-limited and tends to heal spontaneously over a period of time ranging from 2 to 12 weeks.

Typically, blood tests and blood cultures (when children have at least 4 out of 5 predefined symptoms) and throat cultures are done to make the diagnosis of Kawasaki syndrome to rule out other disorders with similar symptoms, such as measles or juvenile idiopathic arthritis.

How is Kawasaki disease treated?

According to what is read on the website of the Higher Institute of Health, the main therapies are: acetylsalicylic acid and / or intravenous immunoglobulins.

It is used to treat Kawasaki disease because:

the treatment consists in injecting a solution of antibodies (immunoglobulins) taken from healthy donors directly into the vein (intravenously). IVIGs can reduce fever and the risk of heart disease.

In addition, if a second dose of IVIG fails to work, corticosteroids can be used as the first treatment if the sick child is at risk for heart complications. Thus it is also possible to prescribe biological drugs (monoclonal antibodies with anti-inflammatory function) and antibiotics, in patients with bacterial infections.

Lyme disease: what it is, symptoms and treatments ❯

add a comment of Kawasaki disease: what it is, symptoms and treatments