Kanelbullar: the recipe for cinnamon brioches in a vegan version

Kanelbullar, or, if you prefer, cinnamon brioches. These delicious, simple and fragrant sweets come directly from Swedish cuisine, typical of the Christmas period as a dessert at the end of the meal, but also for breakfast or as a sweet snack for a snack. It may be for the fabulous scent that emanates from the oven throughout the house, or for the "magic" of natural leavening, the fact is that you cannot help but fall in love with them.

Kanelbullar, or, if you prefer, cinnamon brioches. They come directly from Swedish cuisine these delicious, simple and fragrant sweets, typical of Christmas time as a dessert at the end of a meal, but also for breakfast or as a sweet snack for a snack. It will be for the fabulous perfume that emanates from the oven throughout the house, or for the "Magic" of natural leavening, the fact is that you can't help but fall in love with them.

Loved by young and old, they are usually served with a good coffee. Or with a nice glass of Glogg, a Swedish Christmas drink made with 1 liter of red wine, 3 tablespoons of brandy, 5 cloves, 1 cup of halved almonds, 1 cup of raisins, 3 cinnamon sticks, orange peel, sugar and a little vodka, all put together on the stove until just starting to boil.

Having never tasted the originals, I relied on several recipes found on the web, also trying to translate the Swedish ones thanks to an automatic translator (but with very little results). In the end, here is it vegan version what has come of it, experimenting with the recipe using sourdough, which you can easily replace 1 cube of brewer's yeast. To garnish, I added some walnut kernels, not included in the original recipe, which, on the other hand, includes cardamom. But I haven't used it.

700 gr of flour (I used 400g of flour type "0" and 300 of spelled flour)
250 ml of Avena's milk (but also other plant-based milk, such as almonds or soy)
70 grams of raw cane sugar
80 grams of non-hydrogenated margarine
2 tablespoons of cornstarch
About 200 grams of mother pasta (or 1 cube of brewer's yeast)
1 pinch of salt

Pour the flour into a large bowl, mixing it with the brown sugar and the mother pasta. Mix by adding the cornstarch, salt, margarine at room temperature and milk. Work well, until the dough is smooth and homogeneous. Add more flour if necessary. Let the dough rise in its bowl, away from drafts and at a constant temperature, covering it with a cloth and a wool blanket. Wait now until the volume has doubled.

Then knead again, quickly, and roll out the dough with the help of a rolling pin, taking care to sprinkle with flour to prevent sticking. It must be about 1 centimeter thick. Let rise again for a few hours, always covered. When it has swollen slightly, sprinkle with brown sugar and ground cinnamon. At this point, roll the dough on itself, so that the filling remains inside, pressing with your fingers near the "attachment". 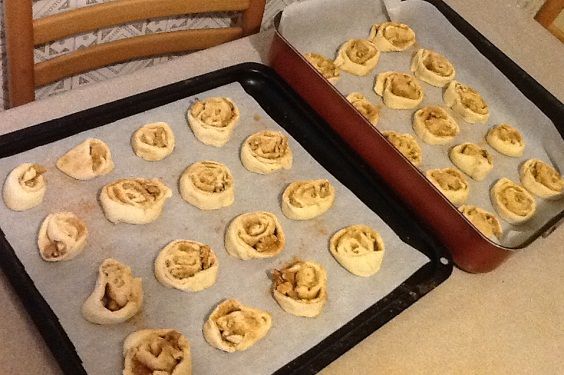 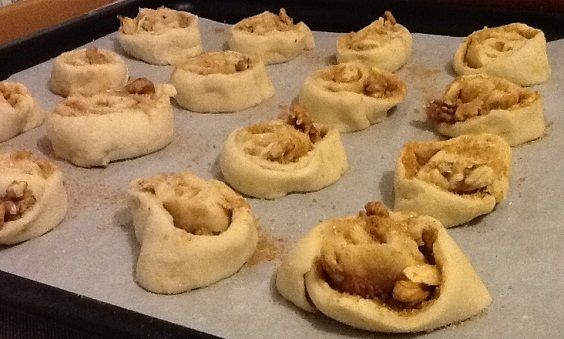 Then cut, with a knife, some round slices about 2 fingers thick, which you will place on a baking sheet covered with baking paper (see photo). Sprinkle a little brown sugar and cinnamon over each slice again and garnish with the walnut kernels. Bake in the oven at 180 ° C for about 30 minutes, until the slices are golden on the surface, while your home will be scented with irresistible cinnamon. 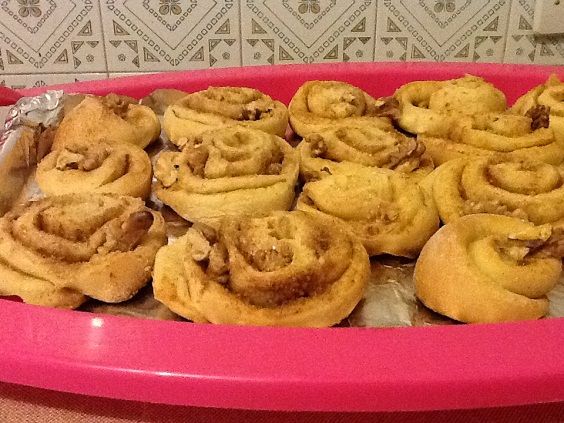 - Cinnamon: the 10 surprising benefits for our health

Kapalbhati: the breathing technique to do 5 minutes a day to detoxify in the deep body and mind ❯

add a comment of Kanelbullar: the recipe for cinnamon brioches in a vegan version