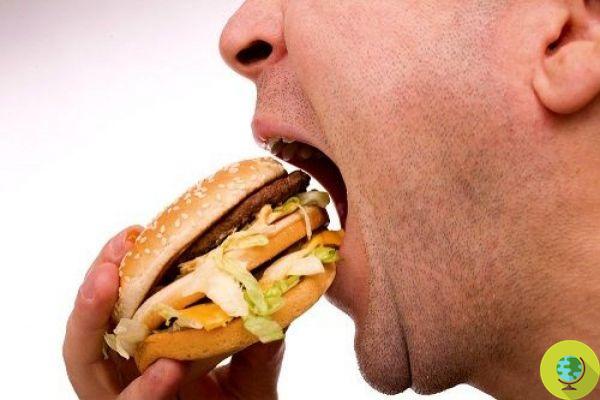 Junk food. Junk food increases the risk depression. In addition to the other damages we have often talked about, hamburgers, fries and co. they would increase the risk of getting depression.

Their confirmation comes following an analysis, carried out on a sample made up of 12.059 volunteers participating in the Sun project, examined for a period of 11 years. Furthermore, the follow-up of the study was carried out for 6 years, during which the many eating habits, their lifestyle and the disorders analyzed at the beginning of the project, in its development and at the end were examined.

In this way, the researchers confirmed that despite the fact that, at the start of the study, none of the volunteers suffered from depression, by the end they were detected. 657 new cases. And that's not all. Those who ingested a lot of trans acids, exceeding their daily caloric intake by 0,6%, had an increased risk of depression of up to 48%. Clearly, the so-called monounsaturated and polyunsaturated ones do not belong to them, i.e. those present in olive oil and more generally in other vegetable oils.

Confirmation comes from Almudena Sanchez-Villegas, associate professor of Preventive Medicine at theUniversity of Las Palmas de Gran Canaria, first author of the article. According to the expert, the study also demonstrated a dose-response relationship “for which more i trans fats had been consumed, the greater was the harmful effect produced by them in the volunteers “.

Hypothesis also deepened by the research team of the University of Navarra, led by Miguel Angel Martinez-Gonzalez, who analyzed the influence of polyunsaturated fats in relation to depression. "We found that healthy fats, along with olive oil, are associated with a lower risk of suffering from depression," she stressed.

I results The findings of the study therefore confirm the thesis of a higher incidence of the disease in the countries of northern Europe compared to those of the south, where, look a bit, the Mediterranean diet. However, experts have noted that the incidence of the disease has increased in recent years: today, around 150 million people suffer from it worldwide.

According to Almudena Sánchez Villegas, this could be due to "radical changes in the sources of fat consumed in Western diets, where we have replaced some types of benefits linked to polyunsaturated and monounsaturated fats, present in vegetable oils and fish oils for saturated acids and trans fats found in meat, butter and other products, such as sweets and fast food".

The results of the research were published in the journal Public Health Nutrition.

Kalsarikännit: the relaxing art of staying at home in the evening ❯

add a comment of Junk food: Junk food increases the risk of depression