Junk food and cancer: possible correlations in a new study 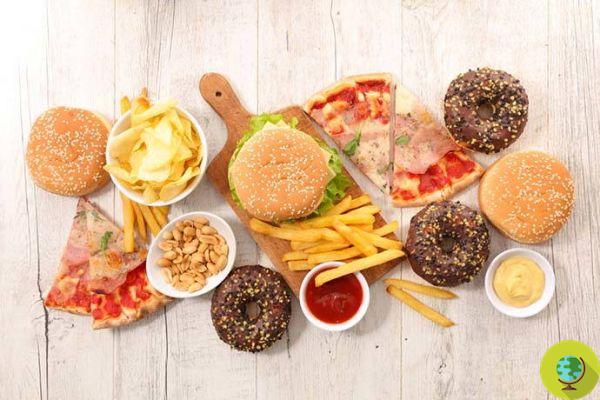 It has been known for some time that junk food, or the so-called junk food, is not good for health. But what correlation is there between these processed foods rich in salt, fat or sugar and cancers? A new French study looked for evidence of a possible link between daily junk food consumption and the emergence of cancer.

That the junk food, namely the so-called junk food, it's not good for your health for a long time. But what is the correlation between these processed foods rich in salt, fat or sugar and tumors? A new French study looked for evidence of a possible link between daily junk food consumption and the emergence of cancer.

Junk food is a very broad category of food that includes chips, snacks, snacks, fizzy drinks and many other foods and drinks that are not really healthy as they are highly processed, processed and added with sugars, salt, preservatives, fats, dyes, etc. In short, we are talking about poor quality food, rich in calories and poor in nutrients useful for our body.

But is eating a certain percentage of junk food every day really dangerous? A new study wanted to understand if there are clues that would prove the correlation between the consumption of these foods and an increased risk of developing cancer.

Until now, a diet based mainly on junk food has been linked to the onset of metabolic syndrome, obesity, diabetes and cardiovascular disease. Less has been focused on speech tumors.

Hence, to investigate this less debated aspect, a research team from the Université Sorbonne Paris Cité wanted to develop a vast study entitled NutriNet-Santé, the results of which were published in the British Medical Journal. The survey was carried out using a questionnaire in which over 100 French citizens reported what they had eaten several times in the course of a day.

To assess the effect of foods on health, foods were grouped according to how much they had been processed or not. They then recorded how many cases of cancer there had been over 5 years, comparing them with the eating habits of those who had seen the much feared disease appear.

Despite a series of other risk factors such as age, genetics, smoking, sedentary lifestyle and more, an increase in cancer risk has been noted due to unregulated eating habits. Specifically, the research has highlighted that compared to a 10% increase in the introduction of junk food in one's diet, there is a 12% more risk of getting cancer (11% in the case of breast cancer). .

On the other hand, a greater risk was not identified for those who consumed other types of food of industrial origin such as canned vegetables and legumes, packaged bread or cheeses.

The study then confirmed once again how the consumption of fresh foods (fruit, vegetables, cereals, legumes, etc.) can, on the contrary, have a protective effect against cancer.

However, it is an observational study based on questionnaires and needs new confirmations to be carried out with all the appropriate scientific methods. The researchers themselves say it:

These findings suggest that the rapid increase in consumption of ultra-processed foods could cause an increase in cancer incidence in the coming decades. (…) Further studies are needed to better understand the relative effect of the different dimensions of processing (nutritional composition, food additives, contact materials and newly formed contaminants) in these associations ".

Junk food: Side effects on the immune system are worse than you can imagine, studies ❯

add a comment of Junk food and cancer: possible correlations in a new study