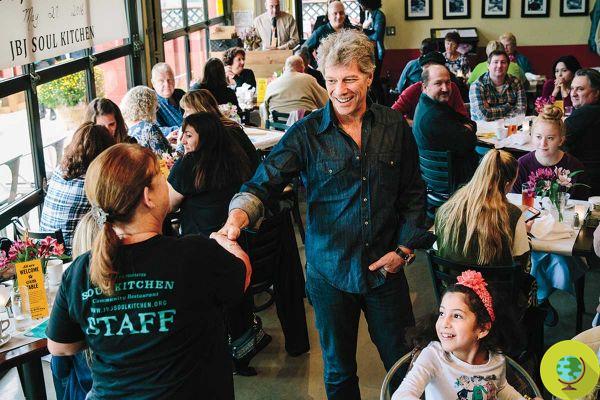 We all know Bon Jovi for his music but few know that the singer is also an activist and promoter of a very interesting social project known as Soul Kitchen. What is it about? Restaurants open to everyone where those in need can eat without paying in exchange for a little help.

We all know each other Bon Jovi for his music but few know that the singer is also an activist and promoter of a social project very interesting known as Soul Kitchen. What is it about? Of  restaurants open to all where those in need can eat without paying in exchange for a little help.

We had already told you about the Soul Kitchen project that bears the signature of Jon Bon Jovi in ​​2011 when the singer opened the first restaurant. Now the clubs have become 2 (both in New Jersey, the second is located near the River Toms, an area hit by Hurricane Sandy in 2012) and they are very popular and appreciated so much that they already served over 100 thousand meals (currently 105,893 to be exact!).

But what is special about these restaurants? They are characterized by being community restaurants that they offer menus with priceless dishes. The idea is that people who have resources pay while those who have no money can eat what they want in exchange for a small contribution or, if they can't afford anything, help in the kitchen or in the gardens and where they grow the most ingredients.

According to the Soul Kitchen website, 54% of the meals served were financed by donations, while the rest through voluntary activities.

Even the waiters and restaurant staff are not professionals but volunteers or, in fact, people who do not have great financial resources and who have made themselves available to the restaurant in exchange for meals. Not surprisingly, the motto of the restaurants is, in addition to Hope Is Delicious, "Everyone is welcome to our table" also written on the aprons and shirts the staff wear.

It is true that it is a solidarity project, but that does not mean that the restaurant does not offer quality products. On the contrary, the menu consists of appetizer, main course and dessert in which organic ingredients are used. And there is also a vegetarian or vegan version.

Among other things, it can happen to taste dishes cooked by Jon himself, often present in restaurants.

In addition to serving food, however, the two venues also offer other services such as one cooking school, after school for children who need it and a consultancy and professional training center for all people who have bureaucratic problems, management of their health or other.