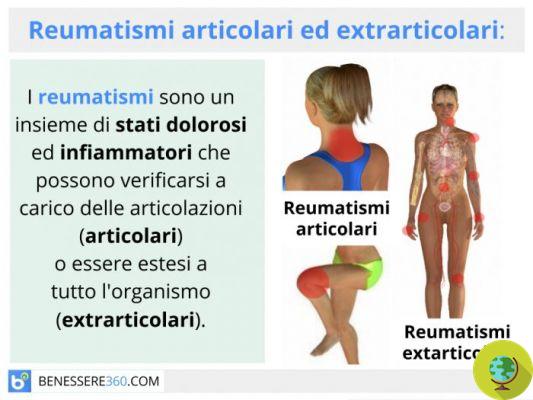 Rheumatoid arthritis is a chronic inflammatory disease. It is classified as an autoimmune disease. This is the most common type of inflammatory arthritis. It mainly affects women, who represent about 75% of patients worldwide.


THErheumatoid arthritis is a chronic inflammatory pathology. It is classified as autoimmune disease. This is the most common type of inflammatory arthritis. It mainly affects women, who represent about 75% of patients worldwide.

It usually starts around middle age, but young people and even children can already develop the disease. Recognize i symptoms it is very important for the patient so that he can consult a rheumatologist, get an accurate diagnosis and develop a treatment plan right away.

1) Articolar pains, swelling, joint stiffness, and warmth around the affected joint.
2) Voltage and morning stiffness, lasting one or more hours.
3) Pain on both articulationsi, for example on both knees.
4) Involvement of small joints of the hands and feet.
5) Rheumatoid nodules under the skin, for example on elbows and hands.
6) Loss of weight and appetite.
7) Fatigue and noticeable loss of energy.
8) Dry eyes and mouth.
9) Joint deformities.
10) Difficulty of movement at the level of the affected joints.

10 things to know about rheumatoid arthritis and rheumatism

Rheumatoid Arthritis, let's learn about this disease better. The following information they will be especially useful to those who suffer from it and to those who think they have symptoms of joint rheumatism.

La exact cause rheumatoid arthritis is still unknown never researchers they are trying to better understand the functioning of the immune system and the development of inflammatory processes in order to be able to give an answer.

Rheumatoid arthritis is an autoimmune disease that would be triggered by the malfunction of the immune system. Rheumatoid arthritis mainly affects the joints, for example with pain and difficulty in movement, but it can also involve other organs. In this case we speak of systemic pathology.

The medical literature suggests that people with rheumatoid arthritis can live about 10-15 years less of healthy peers. However, life expectancy is influenced by many factors, including family history, general health and lifestyle choices.

There is a high risk of disability for rheumatoid arthritis patients. In the United States, arthritis and other rheumatic conditions are the leading cause of disability. Arthritis can lead to work limitations due to pain.

Despite physical limitations, rheumatoid arthritis patients can have one good quality of life. In the most serious cases, however, physical limitations can become disabling and the illness to be faced can lead to an emotional challenge. According to the experts it is important to keep a positive attitude to react and find solutions.

add a comment of Joint rheumatism: 10 symptoms and 10 natural remedies