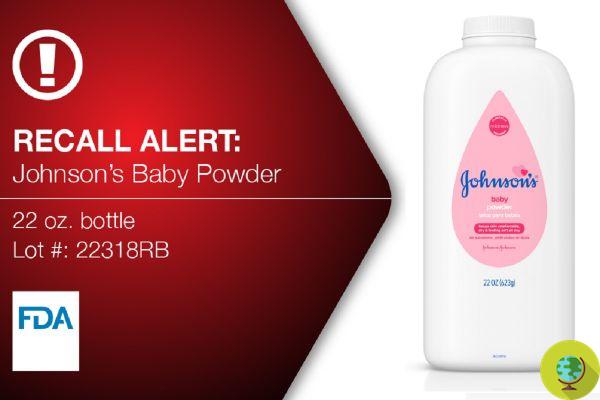 Johnson & Johnson recalls 33 packages of asbestos-contaminated talc from the market, identified by an FDA test.

Johnson & Johnson he just drew from the market 33 thousand packs of baby powder due to the presence of asbestos "As a precaution", declaring that it will now launch a rigorous internal investigation.


The recall concerns packs of Johnson's Baby Powder manufactured and shipped to the United States in 2018 and was announced following a test of the Food and Drugs Administration US that found traces of asbestos in a sample purchased on the web during an investigation.

The lot withdrawn is # 22318RB. The number is located on the back of the bottle, directly under the cap.

On its website, the company reassures its customers by stating that the levels detected are very low and that the tested product is not necessarily authentic:

"The company noted that the detected levels were no higher than 0,00002% and that at this early stage of its investigation into the matter, it is not possible to confirm whether cross-contamination has occurred, if the sample came from a bottle with a seal intact or if the tested product is genuine or counterfeit. JJCI has put in place rigorous testing standards to ensure its cosmetic talc is safe and years of testing, including FDA testing on previous occasions - and up until last month - found no asbestos. Thousands of tests over the past 40 years have repeatedly confirmed that our consumer talc products do not contain asbestos. "

"If you or someone you care for owns a bottle of Johnson Baby Powder Lot # 22318RB, we recommend that you discontinue use of the product."

On the other hand the FDA has recommended consumers to stop using the talc contaminated immediately:

Posted by U.S. Food and Drug Administration on Friday, October 18, 2019

The company has been sued over and over again by many consumers who attributed damage to health, including tumors, precisely to the use of talc products contaminated with toxic substances. But Johnson & Johnson has denied it for years, although just weeks ago the company paid a millionaire compensation for its anti-psychotic drug Risperdal, accused of growing men's breasts.

And speaking of talc, the last sentence dates back to March 2019, when the company was sued by a woman who said she contracted cancer due to talc, and the American jury established a fine of 29 million dollars.

Johnson & Johnson knew that carcinogenic asbestos was in talcum powder, but they hid it for decades ❯