How to replace isinglass in the kitchen? If you follow a vegetarian or vegan diet or simply do not have it at home or do not want to use it, here are some valid alternatives to use according to the recipe

How to replace isinglass in the kitchen? If you follow a vegetarian, vegan diet or simply do not have it at home or do not want to use it, here are some valid alternatives to use according to the recipe


It gels and thickens liquid creams, but it is also found in some cosmetic products and in some medicines: isinglass is an ingredient that is often used in our kitchens and in packaged products, but it does not exactly meet the needs of those who follow a vegetarian food. Mainly based on pork rind, in fact, this thickener must necessarily be removed from certain diets. How to replace isinglass in the kitchen? Vegetarian and vegan alternatives.

What not everyone knows, and which will probably make most people think from today, is that isinglass is now produced starting from some waste from the slaughtering industry, in particular with pork rind (which represents 80% of European production), connective tissues, cartilages and animal bones.

Its name has remained linked to its origins, when the thickener was made starting from the swim bladder or from the cartilages of some fish such as the sturgeon.

Isinglass is one dried food gelatin in sheets, used a lot in the kitchen as a thickener in desserts (puddings in the first place) but also in many savory preparations. On packaged products it is indicated with acronym E441.

Like other jellies, it is a product of animal origin, as mentioned, and the name derives from the ancient production technique, which involved the use of the swim bladder of sturgeon or similar fish, or from fish cartilage. Today, however, it is produced by hydrolysis from collagen, that is through the connective tissue of animals, taking pork rind, tendons, ligaments, bones, cartilage, including from cattle.

80% of the isinglass produced in Europe comes from pork rind. 15% is obtained from bovine bifidus, a thin layer present under the skin, while the remaining 5% is obtained almost entirely from the bones of pigs and cattle.

This particular animal gelatin was born above all for food use, for ice cream, yogurt, chocolates, desserts, gummy candies, but also for some wines and beers for the clarification process. In these cases it may happen that the isinglass does not appear on the label because it is a simple "technological adjuvant", ie a substance that is removed from the product at the end of processing.

In addition, it is found in many non-food products such as photographic film, some adhesives, inks and in some types of drugs such as tablets and suppositories.In addition to food preparation, isinglass can be used as wood glue. or in restoration work to make the gold leaf adhere to the bole.

How to replace isinglass

That said, it is clear that isinglass is an absolutely out ingredient for vegans and vegetarians (but also for others, come to think of it…). But, from agar agar to rice or corn starch, passing through pectin, today it is possible to find many types of thickening and gelling additives.

All of them have characteristics similar to traditional jelly and are able to guarantee the same final effect, but they are of natural or vegetable derivation and therefore can be included in anyone's diet.

The three main alternatives are agar-agar, carrageenan and egg white, but there are so many that you would not believe.

In order to be 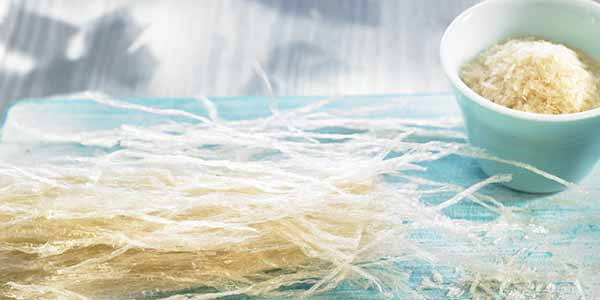 Also known as the kanten and main "vegan" alternative to gelatine of animal origin, agar agar is a mix of red algae. It is a polysaccharide with a high content of mucilage and carrageenan which transform liquids into gelatin.
It therefore has a high thickening power and in addition, unlike isinglass, it is thermo reversible, that is, it allows the mixture to be dissolved again and then deafened again. Generally, agar agar is found in the form of a hot melt powder directly in the preparation to be gelled.

For those who wish to replace isinglass in sweets, it is useful to know that a teaspoon of agar agar corresponds to about eight sheets of isinglass (each sheet weighs about 5 grams), and that this alga can also be used for gelling products that do not solidify with isinglass, such as dishes in which pineapple is present (Source). 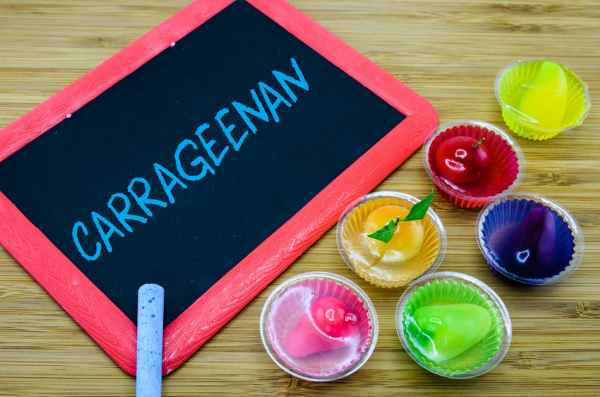 Carrageenan is also a reversible gelling agent extracted from red algae and melts when hot. Unlike agar agar, it allows to obtain an elastic and transparent gel. To activate the thermo reversibility process it is necessary to melt the compound at a temperature above 65 degrees. Generally, reduced to powder, it is found in organic or specialized supermarkets, but it is good to say that in recent years carrageenan has been the subject of several studies because, as an industrial thickener (E407), could cause gastrointestinal problems. 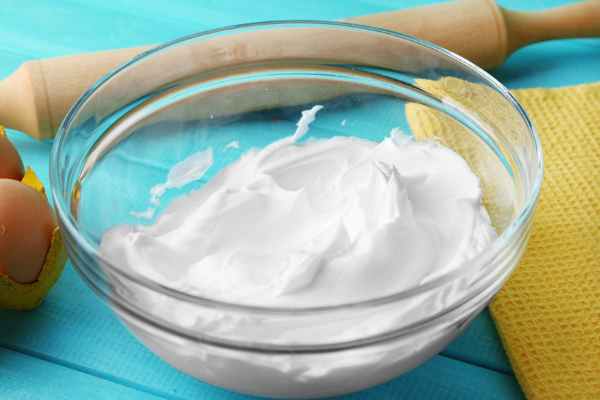 Many bloggers recommend replacing isinglass with egg white especially in the preparation of panna cotta. To activate the gelling of the egg white, it must first be cooked in the oven or in a bain-marie and then amalgamated raw.

Fantastic corn starch that must never be missing in our pantries. Also known as cornstarch or cornmeal, it can also be safely used to thicken milk pudding or to create cake and cheesecake toppings, especially mixed with agave syrup. Here is an example

Other substitutes for isinglass

Traditional flour can be used to thicken many preparations such as bechamel, meat sauces, sweet doughs.

Used in your recipes, rice starch makes many preparations soft, even and above all desserts and baked goods.

Derived from the fermentation of corn starch, it is used to thicken and gel many preparations.

Obtained from fruit, pectin is a valid ally for preparing jams, yogurts or transparent and mirror glazes.

Potato starch is an excellent thickener for creams and sauces.

It is a kind of flour obtained from the carob tree and has a fairly sweet taste, so much so that it is much preferred in pastry. It is rich in natural sugars, without fat or cholesterol.

Ever heard of Guar Gum? It is a white powder obtained from the ground seeds of an Indian vegetable capable of absorbing a lot of water, transforming it into a viscous gelling solution. It can be found in organic supermarkets or online.

or "arrowroot“, Is a starch obtained from Maranta to thicken sauces and desserts, including ice creams. It does not withstand high temperatures.

Kuzu or kudzu (Pueraria lobata) is a mountain climbing legume with purple-blue flowers native to Japan. In cooking, it is used to make thick sauces, soups, desserts and compounds.

add a comment of Isinglass: how to replace it in the kitchen. The veg alternatives in the various recipes