Is your tea soaked in plastic? Watch out for the filters you use

One study tested plastic tea filters by detecting the release of billions of microplastics into the water during brewing.

A thorough investigation carried out in 2019 by some scholars put plastic tea filters under the magnifying glass, detecting the release of billions of microplastics into the water during the infusion process.


The growing presence of plastic materials of micro and nano dimensions in the environment and in the food chain is a source of growing concern both for the health of the planet and for that of animals and humans. Although consumers are becoming more environmentally conscious and committed to reduce the consumption of single-use plastics, manufacturers continue to invest in plastics and some companies are even replacing packaging made from greener materials with plastic packaging.

This is the case, for example, of the tea industry, where some producers have decided to resort to plastic bags instead of traditional paper bags.

The problem of plastic in tea filters has always existed, as thermoplastic fibers such as propylene are often used to seal paper packaging.

These however, new sachets contain up to 25% plastic and it is questionable whether this plastic ends up in the tea cup, given the high infusion temperatures.

This question was answered by researchers from McGill University in Montreal, through a study published in 2019 in the American Chemical Society, Environmental Science & Technology journal.

The objective of the study was precisely to determine whether plastic tea filters released micro and nanoplastics during the infusion process.

The researchers carried out tests on four different types of tea packed in nylon bags and other plastic materials. After removing the tea leaves from the filters, they soaked the bags in 95 ° C water and found that a single package is capable of releasing approximately 11,6 billion microplastics and 3,1 billion nanoplastics in a cup of tea, levels much higher than those found in other foods. 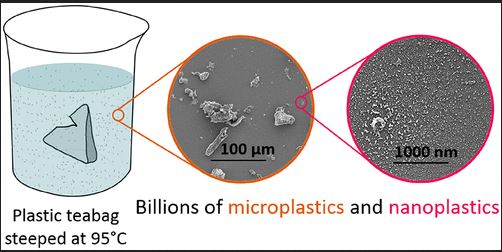 Scientists do not yet know what consequences ingesting such large quantities of plastic particles may have on humans, but an initial assessment of acute toxicity on water fleas (Daphnia magna) has shown that exposure to substances released from the sachets of tea has negative effects on behavior and development.

Although more research is needed to determine whether or not similar side effects occur in humans, we are known to ingest at least 5 grams of plastic per day through food and drink and this can only cause concern.

Microplastics are in fact capable of penetrate into the bloodstream and lymphatic system and could affect the immune response, hormone synthesis and reproduction, act as a procancer, damage the liver, or cause developmental delays.

Given the high doses of plastic particles extracted during hot water extraction of the tea, the researchers suggest buy infusions packed in paper filters or, even better, in bulk, to limit the already high exposure to micro and nanoplastics.

add a comment of Is your tea soaked in plastic? Watch out for the filters you use