Is there a psoriasis diet that helps manage symptoms? 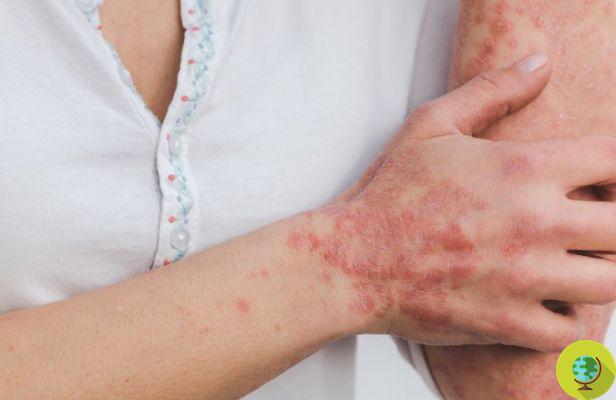 Psoriasis is an autoimmune disease that causes skin lesions and blemishes. Let's find out the best diet to manage symptoms

Psoriasis is an autoimmune disease that causes skin lesions and blemishes. Let's find out the best diet to manage symptoms


Living with a chronic condition such as Psoriasis it affects life in so many ways. Psoriasis is one autoimmune disease, which means that the immune system goes a little haywire, causing the appearance of inflamed skin patches or plaques which can be painful, itchy and really frustrating to deal with.

While there is absolutely no reason to feel embarrassed about having a condition that may be so out of our control, some people may suffer from it, as the spots can appear in very visible areas, such as knees, elbows, and chest. Psoriasis sufferers know very well that there are periods of worsening of symptoms that can last days, weeks or even months, these are called exacerbations. After the first "outbreak," there are a number of things that can trigger these flare-ups, which vary widely from person to person, from stress to dry weather to an infection. (Read also: Psoriasis and unhappiness: how difficult it is to live with this disease)

What are the common triggers of psoriasis?

Le flare-ups of psoriasis they are typically triggered by environmental or internal factors. According to the American Academy of Dermatology (AAD), the causes can be:

Can Your Diet Affect Psoriasis Symptoms?

La diet can affect inflammation in the body, and psoriasis is an inflammatory condition, so it makes sense to think that diet may have some effect on those suffering from this skin problem. But science has not yet solidified a connection; in fact, although there is some evidence investigating this link, there is no concrete data to support the theory that diet can cause psoriasis.

Most research on this topic is weak, as it is based on a small sample; in addition, many people who participated in these studies continued to take their prescribed medications, as well as change their diets as part of the research. Unfortunately, due to the way many of these studies have been designed, it's really hard to conclude which dietary changes are responsible for worsening or improving symptoms.

So far, there are two main dietary approaches for people with psoriasis: diete additive e subtractive diets. With an additive diet, the focus is on consuming more than one specific food or nutrient. With a subtractive diet, certain foods or nutrients are slowly removed. Of course, whenever you change your diet, especially if you have a chronic health condition, it's best to talk to your doctor or dietician to avoid side effects, unintentional weight loss, or nutritional deficiencies. (Read also: Psoriasis: 10 natural remedies)

Psoriasis lesions are triggered by inflammation in the body, so it makes sense to assume that i "anti-inflammatory" foods can help tame that erratic immune response. Researchers believe that foods with certain nutrients can reduce oxidative stress in the body, a process that contributes to inflammation, but it is an area of ​​research that is still being explored. A typical list of "anti-inflammatory" foods is quite large and diverse, including berries, leafy greens, nuts, oily fish, tomatoes, and more. The theory is that these foods are able to prevent the onset of inflammation or reduce its impact.

For example, it is believed that a fat is called eicosapentaenoic acid (EPA), found in oily fish such as salmon, helps reduce the number of inflammatory chemicals in the body.

According to one study of 2020 published in the Journal of the American Academy of Dermatology, people who have psoriasis are twice as likely to have the celiac disease compared to those without psoriasis. Celiac disease is an autoimmune condition that causes intestinal damage due to the consumption of gluten, a protein found in wheat, rye and barley. Although numerous studies show a correlation between the two conditions, the relationship between psoriasis and celiac disease is not fully understood. So, according to the Cleveland Clinic if you have celiac disease and psoriasis, following a gluten-free diet can help you avoid skin rashes.

But what about the fact that a gluten-free diet may or may not help reduce symptoms, the results so far have been mixed; consequently, it cannot be said with certainty that it is good to avoid all gluten in the case of psoriasis, if you do not have sensitivity or intolerance to this protein.

There is some research indicating that the ketogenic diet may be a viable alternative for people with psoriasis. For example, according to a case of study of 2016 published in Obesity Research & Clinical Practice a woman followed a low calorie ketogenic diet for four weeks, meaning she ate no carbs, and reaped benefits.

When you are on a ketogenic diet, the goal is to encourage the body to use fat as a primary source of energy, instead of glucose (which you get from carbohydrates) as you normally would. Of course, a woman's experience isn't enough to say that a keto diet can help with psoriasis. In fact, the study authors attribute the improvement in symptoms to weight loss, as there is a relationship between the reduction in body weight and the improvement in flare-ups of the Psoriasis.

In another 2021 study published in the Journal of Proteome Research, 30 people with psoriasis who were not taking medications followed a non-keto diet and then a keto diet to see how it affected their symptoms. According to the data, psoriasis was less painful and covered fewer areas of the body. Unfortunately, even in this case it was a very small study, to arrive at definitive data.

La Mediterranean diet is quite popular for good reason: this diet has tons of benefits for overall health, primarily because it can reduce the risk of cardiovascular disease and other inflammatory conditions, such asrheumatoid arthritis. The Mediterranean diet is also easier to follow than other restrictive plans, because it includes a healthy mix of proteins, fats and carbohydrates, and a balanced consumption of fruits, vegetables, legumes, nuts, whole grains, olive oil, fish and some dairy.

Since many of these foods are thought to have anti-inflammatory properties, especially when combined, there has been some interest that this diet is beneficial for psoriasis. It's hard to say that the diet itself helps with psoriasis flare-ups, but of all the food plans mentioned, the Mediterranean diet is considered the best; moreover, it is called the "gold standard" because it is supported by science as it is full of foods rich in nutrients, can promote health. (Read also: Psoriasis: The Mediterranean diet reduces inflammation. The new study)

What are the treatments to combat psoriasis?

There are many other proven treatments that work effectively against psoriasis. Additionally, medications to treat this problem are determined by the severity of symptoms, where the lesions are located, and how much the condition affects your ability to perform daily activities.

Here are some treatments for psoriasis that may be worth asking your doctor, according to the Mayo Clinic:

Ultimately, working closely with a dermatologist will help you figure out what is the best course of action for managing and limiting the symptoms of this chronic skin condition.

On the Psoriasis could it be interesting for you:

add a comment of Is there a psoriasis diet that helps manage symptoms?