Is running with a mask dangerous? It could also cause fainting 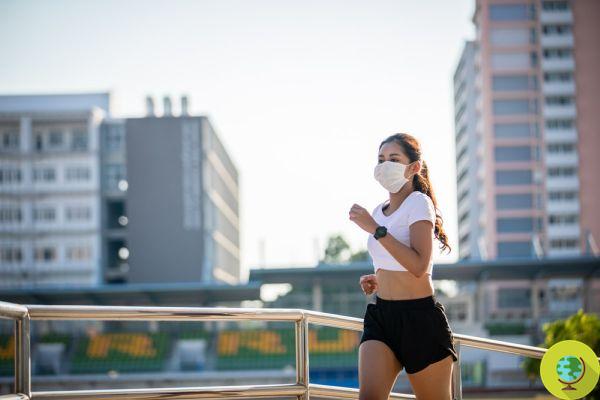 Does running with a mask expose runners to health hazards? The answer of doctors and athletes at a competitive level is yes, you risk fainting

From 4 May runners will be able to resume running even in places far from home but, at least in some regions, the use of a mask may be required or some sportsmen may choose to use it independently. Are there any risks involved in exercising with this device that covers the mouth and nose? According to some doctors and experienced runners, yes.


The new decree, signed by Giuseppe Conte and relating to Phase 2, regarding the "runner" argument specifies only that it is necessary to keep the safety distances, but it does not make the use of the mask mandatory. However, previous local ordinances, currently active in some regions, ask those who run to wear it or in any case to cover their mouth and nose. At the moment it is obviously not known if regions or mayors, after May 4, will intervene autonomously by changing the cards on the table, but we are still beginning to question whether this device could create risks to the health of those who run.

Naturally, runners who have already experienced the use of the mask during training know how much more tiring it is between breathing and rapid heartbeat, sweat and discomfort that are created in the area between the nose and mouth. But is it just their feeling or does it really expose you to possible risks?

Some doctors have made clear statements on this matter. For example Simona Pierini, Cardiologist Head of the Coronary Unit of the ASST Nord Milano Hospital e Sports doctor (as well as runner) told Runnersworld:

"Beyond the lack of comfort, the use of a particularly occlusive mask can, on the one hand, reduce the flow of air, therefore the supply of O2 to the lungs, and on the other, cause a 'trapping' of carbon dioxide exhaled. A scarce elimination of carbon dioxide, therefore its accumulation in the envelope of the mask, determines a self-breathing of the same; the increase in CO2 in the blood further stimulates hyperventilation, already partially present for the physical activity in progress, which can cause dizziness and, in the most serious cases, feelings of fainting ".

The doctor advises runners not to overdo hyperventilating as well as to stop and take some air if they experience discomfort, dizziness or fainting.

Of the same opinion it is Giacomo Astrua, agonist and sports dietician for athletes who wrote an article on Medical Fact in which he claims that:

“It can be dangerous to carry out a physical activity with a mask that exploits the obligatory aerobic energy metabolism (“ cardio ”sports such as running), or optional (such as an outdoor gymnastics session). Because? During this type of physical activity, our body needs proper breathing to trigger the energy metabolism that allows it to take place: in practice it needs to inhale oxygen and expel carbon dioxide, all with a higher frequency than in a state of rest. . If, let's say the case, we ran with a mask, in the space between the mask and the face an atmosphere rich in carbon dioxide exhaled by ourselves during the effort would be created. Consequently, we would go and breathe in air with an excessive concentration of this gas and a lower concentration of oxygen ”.

What are the consequences of this situation? He explains clearly:

"Dizziness, confusion, headache, increased respiratory rate, rapid heartbeat, shortness of breath, increased blood pressure, loss of coordination, vision problems, cyanosis, premature fatigue and even loss of consciousness and fainting, because if the body he cannot do the work to which we submit him, the only defense weapon he has is to stop, like it or not ”.

Then there is a secondary problem compared to that of breathing but particularly annoying for those who run: that of sweat that stops in the mask between the mouth and nose, creating many discomforts.

To remedy all this, some companies like Joker, La Sportiva and UYN are making specific masks for runners, washable and reusable, which slow down the dispersion of droplets of saliva but are also able to facilitate breathing.

Running is good for the brain and repairs it ❯

add a comment of Is running with a mask dangerous? It could also cause fainting