Is leaving the disinfectant gel in the car dangerous? Can it really catch fire? 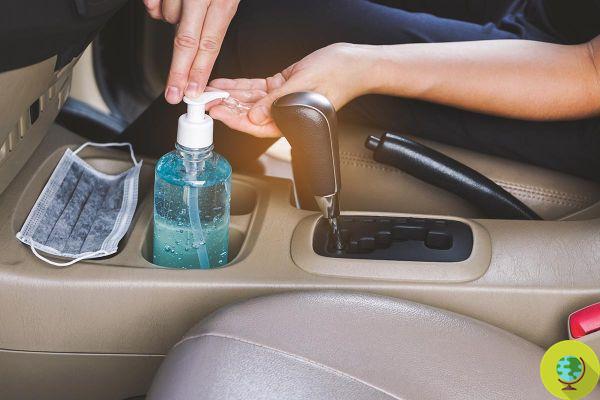 Is keeping hand sanitizer gel in the car really dangerous and does it risk a fire? Some experts have clarified the matter

Among the things most used in this period, in addition to the mask, there are hand disinfectant gels. But is it safe to keep them in the car even at high temperatures? Some experts have clarified the matter.


On social media, in recent months, several photos have been shared showing internal doors of burnt cars. To be accused of this unpleasant and dangerous accident are the hand sanitizers in combination with the high interior temperatures.

It is true that hand sanitizer is essentially alcohol and therefore flammable but it is equally true that it is highly unlikely (though not entirely impossible) that it will catch fire on its own, even when exposed to high temperatures such as those found in cars in the sun.

To state this is Reinaldo Bazito, professor at the Institute of Chemistry of Sao Paulo (Brazil). The teacher told Estadão that:

“It's okay to leave small bottles in the car, as long as they are tightly closed and out of direct sunlight. Now leaving a 500ml or 1000ml bottle on the car dashboard in direct sunlight is not a good idea! But anyway it doesn't catch fire by itself! "

As the expert explained, in order for a bottle of hand gel to start to burn the presence of an ignition source is required or, in the case of high temperatures, it would be necessary to reach 363 ° C, which is certainly not recorded in the passenger compartment of the car even if left in the sun.

However, alcohol could generate flammable vapors (higher if the outside temperature is also high) but c'then a spark, flame, etc. is needed. to make it burn.

TheFrench chemical company Arkema who posted a post on Twitter showing a burnt car door due to inflammation of a hydroalcoholic gel bottle (the same viral photo runs on social media from France to Brazil). The company basically confirms that even if the gel contains alcohol, it is very unlikely that it will catch fire on its own in a vehicle.

An event which, however, chemistry experts consider highly unlikely but not impossible!

Hello @CheckNewsfr. Do you know if this document is true? pic.twitter.com/8AJ7STjdye

As confirmed to Franceinfo, Yannick Pouilloux, professor at the Institute of Environmental Chemistry at the University of Poitiers, the hydroalcoholic gel can ignite on its own, but only under the condition that it is brought to an extremely high temperature. The National Research and Safety Institute confirms in its toxicological sheet that the self-ignition temperature of ethanol is between 363 and 425 ° C.

Ma there is another possibility. University of Orleans chemistry professor Guillaume Dayma, researcher at the CNRS Institute for Combustion, Aerothermal Energy, Reactivity and the Environment, warns of a possible accident in case of "magnifying glass effect".

“If a pair of glasses, for example, had a magnifying glass effect on the bottle, then eventually there could be self-ignition. But it would be a very unfortunate circumstance, ”Dayma told Liberation.

The director of research at the CNRS and the Institut de recherche de chimie de Paris, François-Xavier Coudert, makes the same hypothesis at 20minutes.

"it would be necessary, for example, that a magnifying glass had remained in the car and that the sun's rays reached it".

In short, a really difficult circumstance but, given the flammability of the substance in general, it is always good to be careful. If you can't help but keep the disinfectant gel in your car, the safest place may be inside the glove box or trunk of the car where at least direct sunlight can't hit it and you don't risk the effect. magnifying glass.

Aspartame is not as safe as EFSA says and should be banned: study ❯

add a comment of Is leaving the disinfectant gel in the car dangerous? Can it really catch fire?