Is heating or microwaving food dangerous? 5 myths to dispel 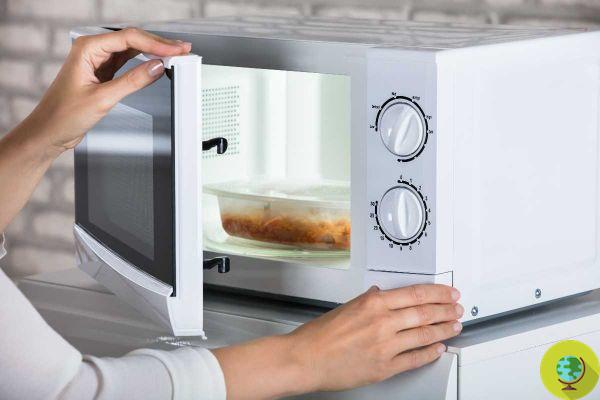 There are many myths and legends about the microwave oven. Let's see together 5 myths about its use and some tips for optimal cooking

The microwave oven is a household appliance around which many prejudices and legends revolve, there are those who use it daily and those who hate it or look at it with contempt. In fact, the microwave is one of the most used appliances in the home, because it meets the needs of speed and comfort.


This small oven is able to heat different foods through the emission of microwaves, which are absorbed by the molecules of water and fat, which, thanks to the energy received, are able to vibrate: the molecular friction caused by rubbing generates heat that will heat or cook your food quickly. If heating food in the microwave could have the disadvantage of a not exactly homogeneous distribution of heat, the greatest advantage remains that of allowing you to heat and cook various foods very quickly.

Over the years, various information and false fears have circulated about the microwave, mainly linked to fears related to waves

Today we tell you what the five false myths best known and we give you some advice to make the best use of this tool.

Microwaves cannot come out of the oven

As reported by Altroconsumo, the metal casing and the metal mesh incorporated in the door of the microwave oven protect against the escape of these waves, which tend to come out only in the event of malfunction or tampering with the instrument, therefore not constituting a health risk. .

The microwave oven is not carcinogenic

Being used for a very short time, this appliance cannot lead to a carcinogenic exposure that has mutagenic effects. According to what the Istituto Superiore di Sanità affirms, a possible release of radiation is to be excluded, as it is rare and very small. It should also be remembered that exposure would still be lower than that to which we are exposed when we use a normal mobile phone.

Cooking in the microwave does not alter the food

Various investigations have shown that there are no particular differences between microwave cooking and conventional cooking. Food digestibility is similar in both cooking methods. Compared to normal cooking, that microwave does not damage and does not alter the water-soluble vitamins (C and B), producing fewer unwanted substances, such as hydrocarbons.

Microwave ovens do not interfere with other appliances

If the cell phone in the microwave continues to receive signals, it does not mean that the oven is not shielded

The cell phone test in the closed microwave is absolutely not useful for testing its tightness. Although we always talk about microwaves, often not all the methodologies are known, in fact these have a frequency that oscillates between 300GHz (millimeter microwaves) to a few GHz (centimeter microwaves) or even less. According to otherconsumo, a microwave oven works at about 2.45GHz and the shields are optimized for this specific wavelength. Cell phone bands operate at other frequencies, so these cannot be shielded by the oven.

In light of these debunked myths, can we therefore consider microwave cooking safe?

Certainly the risks of cancer related to cooking in the appliance have been repeatedly denied by the WHO and FDA, but they still remain dangers inherent in its use, especially linked to the type of containers used to cook food. A test conducted in 2008 in the United States revealed that some plastic containers thought to be suitable for cooking in microwaves, actually caused the release of bisphenol A, the notorious endocrine disruptor considered dangerous so much so that in these days EFSA is lowering the tolerated safety thresholds by 100 times.

Also, it is good to point out that microwave energy does not always penetrate well into very thick foods, causing it uneven cooking, as it can happen when the milk is heated, we therefore advise you to let the food rest for a few minutes, especially if intended for babies and children, to allow the heat to be distributed evenly.

If you are interested in the topic see also:

add a comment of Is heating or microwaving food dangerous? 5 myths to dispel