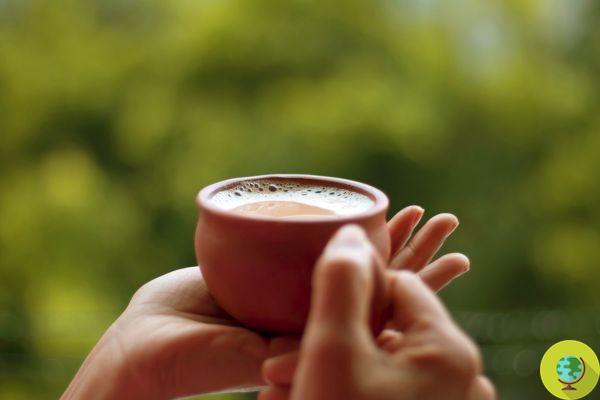 In India on trains and in stations, tea will be served in traditional terracotta cups, the kulhad, no longer in plastic ones

They were one of the symbols of the past, abandoned to give way to plastic but now they are returning precisely to limit pollution. We are in India where on trains and in stations, tea will be served in traditional terracotta cups, known as everybody.


This small and humble relic of the Indian past will be the protagonist of the ecological turning point that will affect transport and in particular the railways. It was in fact arranged that tea will be sold in the Kulhads instead of plastic cups in all railway stations in the country. This was also confirmed by the Minister of Railways Piyush Goyal. Speaking at an event organized at the Digawara railway station in Alwar district, Rajasthan, the minister said the initiative will be the contribution of the railways towards aIndia without plastic. It's not a drop in the bucket when you consider that there are 7 stations where tea will be served in terracotta cups across the country.

The kulhad, reminiscent of a past pastoral era, are not painted or enameled but are perfectly biodegradable and respectful of the environment. That's why they were chosen to supplant single-use plastics. A revolution that has already begun:

"Today the tea is given in the Kulhad at nearly 400 railway stations in the country and in the future it is our intention to sell it only in these cups at all railway stations in the country," said Goyal. The Kulhads will not only help reduce the use of toxic plastic and save the environment, but they will provide jobs and income for hundreds of thousands of potters ”.

Not to mention that in these special cups the tea has a completely different flavor.

The transformation of the railways also involves electrification. The country has made huge investments to make rail transport greener. The minister explained that electrification of railway lines across the country will save the environment as the engines will run on electricity produced in India, saving fuel, money and time. In addition, the speed of the trains will also be increased e

"This will also help farmers who will be able to get their crops anywhere in the country (via rail freight) in less time," he added.

The choice of the return to the kulhad is not only an ecological solution but an important message: in an era of unbridled consumerism and a throwaway culture, they also symbolize a way of life based on land and craftsmanship.

Sources of reference: The India Times,,