An important turning point against the use of single-use plastics also comes from'India where, on the occasion of Gandhi's birthday, the country will ban 6 different products made in disposable plastic.


In India, the birthday of Gandhi, leader of the movement for the freedom and independence of this country, born on October 2, 1869, is still very much felt. Just in the next and now near anniversary, the officials have decided to launch a new law at the national level which will prohibit the use of plastic bags, glasses, plates, straws, bottles and some sachets (such as those for sauces), made with this highly polluting material.

The ban will affect not only the use within the country but also the possibility of producing and importing such plastic products. This will help eliminate single-use plastics from Indian towns and villages, some of the most polluted places in the world.

The situation of plastic pollution in India is particularly serious as this country lacks an organized system for the management of such waste which leads, as a direct consequence, to having plastic abandoned in practically all cities and villages. 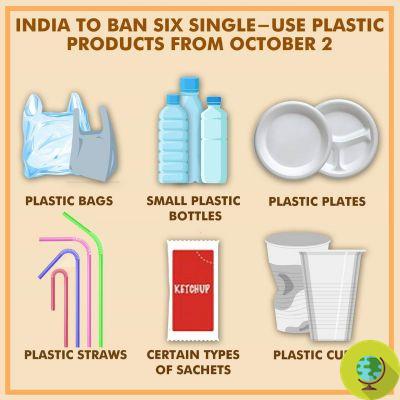 Prime Minister of India, Narendra Modi, is working on the commitment made eliminate plastics by 2022 and this ban will be the first big step to rid the country of single-use plastics (some Indian states have actually already banned at least polythene bags).

It has been estimated that the new provision will allow for reduce India's annual consumption of plastic by 5 to 10% out of a total of about 14 million tons of plastic that this country consumes annually.

Penalties for failing to comply with the ban are likely to take effect after an initial six-month period so that everyone can find and adopt alternatives.

The government will then ask e-commerce companies to reduce plastic packaging, taking action in this sector is of fundamental importance given that it represents almost 40% of the total annual plastic used in the country. The focus will be on the use of alternative materials or, at least, on types of recyclable plastic.