No to incinerators, because they increase mortality. A conference entitled “Incinerators and health: no risk?” Was held in Terni on Saturday 12 January, organized by the No Incinerators Terni Committee and by the LiberaMente association. A full house that alone means a lot


No to incinerators, because they increase mortality. A conference entitled "Incinerators and health: no risk?", Organized by No Incinerators Terni Committee and the association Freely. A full house that alone means a lot.

The meeting, which was attended by numerous experts in the sector, underlined i potential damage represented by incinerators with their emissions, the latter are responsible for an increase in the incidence of tumors.

The conference took place in the red room of Palazzo Gazzoli, in Terni. It was attended by Prof. Giuseppe Giorgio Nenci, emeritus full professor of Internal Medicine at the University of Perugia, Dr. Valerio Gennaro, head of the regional operational center (COR Liguria) of the national mesothelioma register at the hospital University of San Martino, National Institute for Cancer Research and Dr. Giovanni Advantages of the Doctors for the Environment association.

The re-ignition of the Terni incinerator therefore raises concern in Umbria. According to Nenci, an incinerator emits about 250 types of volatile compounds, of mostly unknown nature. Of them, only 2% falls on the surrounding surface. The remainder, carried by the wind, ends up reaching the soil, water, crops and livestock. From here to man it is a short step.

The experts are concerned about the nanopolveri. As a precedent showed dossier of the Committee, the incineration of waste produces nanopowders, dioxins, furans and other toxic substances which, if inhaled or taken through foods that have absorbed them, can reach organs through the blood in a few hours. The resulting pathologies are cancer and other lethal malformations, but also diseases such as Parkinson's and Alzheimer's.

Not to mention that, according to experts, incineration it is by no means a solution to the waste problem. The dossier also highlighted that only 35% of total waste burns through this system. 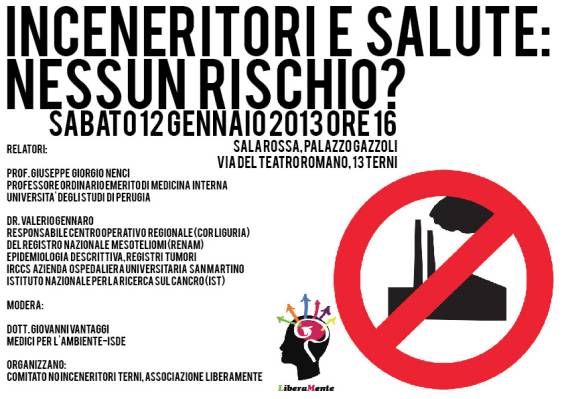 Definitely more effective and less risky is the collection. According to Valerio Gennaro, of the National Institute for Cancer Research in Genoa, there is no need for incineration. Furthermore, according to him, the procedures for monitoring data on pollution quotas, on the detection of the control units, on the incidence of diseases, on hospitalizations, on the number of malformations and abortions should be made simpler.

How has explained Fabio Neri of the No Incinerators Terni Committee, “sometimes interpretations of data that are difficult to understand arrive from the scientific and institutional world. It was agreed on the alternative ways of reuse and recycling of waste to make up for the use of the incineration cycle, the path of recycling plastic, paper and glass and other recoverable materials is the one to be pursued validly to have advantages both in terms of public and economic health ".

- Recycle waste from incinerators in green building with Matrix

- Couples do separate collection more than singles. And women more than men

2010 incentives: those for green economy companies are too weak ❯

add a comment of Incinerators: increase the risk of cancer