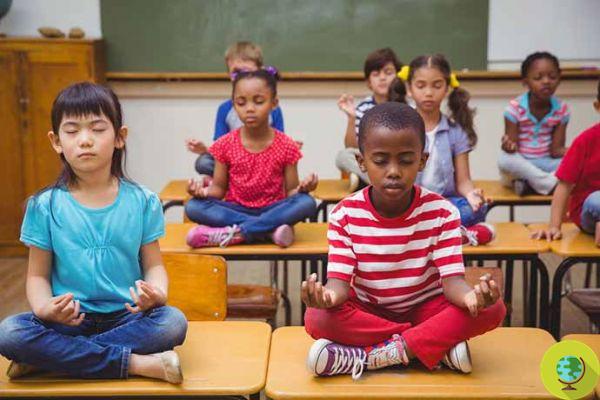 The British government has decided to introduce mindfulness meditation as a subject in 370 English schools with the aim of improving children's mental health. The experimentation will go on until 2021

The British government has decided to introduce mindfulness meditation as a subject in 370 English schools with the aim of improving children's mental health. The experimentation will go on until 2021


Schools in England are updating and have decided to add also the to the classic subjects mindfulness, or the practice of meditation and awareness that is based on breathing and attention to the present moment.

As in all schools in the world, mathematics, science, history, etc. are also generally studied in the United Kingdom. however, there are several schools that are preparing to expand their traditional curriculum by adding a very special subject: mindfulness.

There will be about 370 schools where students will start practicing mindfulness as part of a study project aimed at improving the mental health of young people. This was announced by the British government in a press release which also reads that the experiment, which will last until 2021, will be one of the largest of its kind in the world.

Students will work with mental health experts to learn relaxation and breathing exercises and other innovative techniques to help them manage their emotions.

The objective of the program, realized thanks to the collaboration with the Anna Freud Center, is to study which approaches work best to support the mental health and well-being of young people in a world that is rapidly changing, which exposes them particularly and makes them live under pressure.

It is no coincidence that in recent years children have increasingly faced difficult situations such as bullying and cyberbullying, stress and other difficulties of various kinds at school. The teachers, supported by experts, hold the key not only to promote learning and cultural enrichment of children but also to prevent any mental health problems.

"Children will begin to be introduced gradually to problems related to mental health, well-being and happiness from the beginning of primary school."

The initiative comes following the results of a survey commissioned by the National Health Service which found that one in eight children or young people in England (aged 5-19) suffered from at least one mental disorder at the time of the assessment in 2017. .

Among other things, the survey indicated a slight increase in mental disorders in children between the ages of 5 and 15, which rose to 11,2% in 2017 from 9,7% in 1999. Disorders such as anxiety and depression were the most common, especially in girls.

Will mindulness be the best strategy to keep young English people healthy? The conditions are all there ...

If you are interested in learning more about mindfulness you can follow our course: Mindfulness: what it is, the benefits and exercises to start held by psychologist Nashira Laura Andreon.

add a comment of In English schools, mindfulness meditation becomes an official subject