In Australia, a pack of cigarettes will cost up to $ 50 from September

In Australia cigarette prices skyrocket for the eighth consecutive annual increase in the government's bid to reduce tobacco use.

To combat smoking addiction, the only truly effective solution is a constant increase in the excise duty on tobacco. The Australian Federal Government thinks exactly this way, which will launch a further increase (this policy has been followed for a few years already) 12,5% ​​of cigarette prices.

In this way, in Australia - which, on another side, does not spare heavy fines for those who throw cigarettes out of the car window - the cheapest packages will cost 29 Australian dollars (about 18 euros) and the most expensive ones will touch 50 (about 30 euros), so as well as people who use bulk tobacco will not be immune from tax increases.

From September, therefore, Australians will pay one of the highest prices in the world for a pack of cigarettes, thanks to what is - in Australian history - theeighth consecutive increase annually, in an attempt by the government to reduce tobacco consumption.

The federal government's excise duties on tobacco, in fact, are increased by 12,5% ​​for each year since 2013, plus a further 25% increase in 2010. However, experts argue that the soaring prices only punish those who are addicted and further stimulate the black market. 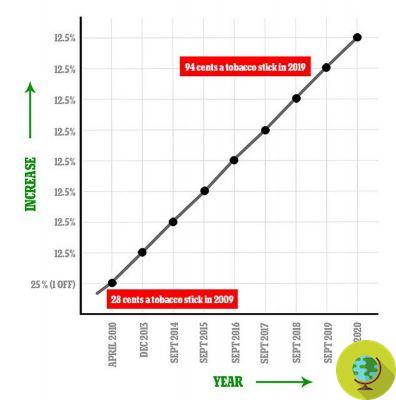 On the one hand, in fact, according to the World Health Organization (WHO) price increases would be "the most effective way to encourage tobacco users to quit and prevent children from starting to smoke", on the other, Dr. Colin Mendelsohn, of the University of New South Wales School of Public Health, pointed out that tax hikes are no longer having the large impact on smoking rates they once did.

“We have traditionally known that raising taxes reduces smoking once. But once you get to this level, people who are addicted will say, 'I have no choice but to keep smoking anyway.' There is no longer the advantage. All that is being done is punishing addicted smokers who fail to quit and stimulate the black market ”.

▪️Great for government coffers
▪️Not so great for addicted low-income smokers who are unable to quit and their families
▪️Sorry you can't #vape instead because it is bannedhttps://t.co/4U4W6dOIeB

He was echoed by Abby Smith, director of the anti-smoking campaign of the Cancer Council of Tasmania, who when the measure came into force had declared that "whoever smokes at least one pack a day will spend 10 thousand Australian dollars a year".

Proof of the fact that, probably, foreseeing an increase in taxes in a state is not always and only the only way to follow to guarantee the good health of its citizens.

In Bangladesh, the Minister of Agriculture urges citizens to consume less rice, but is overwhelmed by criticism ❯

add a comment of In Australia, a pack of cigarettes will cost up to $ 50 from September