If you notice this while walking, it could be an early sign of Parkinson's 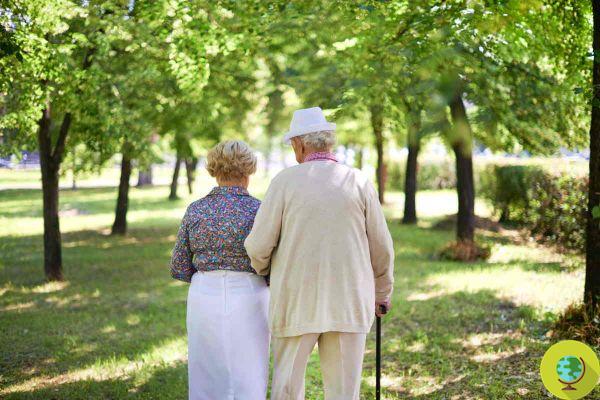 Among the early symptoms of the onset of Parkinson's, researchers have highlighted one related to the way of walking

Among the early symptoms of the onset of Parkinson's, researchers have highlighted one related to the way you swing your arms while walking


Strong tremor and slowing down (bradykinesia), but also stiffness in facial expression and persistent neck pain: Parkinson's disease manifests itself in a thousand facets, but those symptoms are often given weight when it is already advanced. There is a way, however, to spot an early sign of the disease in our daily movements. And it has to do with walking.

Even in the case of Parkinson's, in fact, early diagnosis is the key to better manage the entire course of therapy. According to a Penn State study published in 2012 in Gait & Posture, those with Parkinson's would have a significantly higher rate of asymmetry in one arm swing when walking, meaning one arm swings much less than the other. And this would be a fact that would allow an easy and cheap early diagnosis.

Scientists have long known that people with Parkinson's exhibit reduced arm swing during the later stages of the disease, but no one had found an easy way to measure it, '' explains Stephen Piazza, associate professor of kinesiology and one of the authors of the research. We have found not only that people with the disease exhibit reduced rocking motion while walking, but that arm swing is also asymmetrical, and this asymmetry can be easily detected early in disease progression.

What is Parkinson's disease and main symptoms

It is a degenerative disease of the central nervous system, caused by the progressive death of the nerve cells in the brain that produce the neurotransmitter dopamine, which controls the movements of the body. The disease occurs when dopamine production in the brain drops due to the degeneration of neurons. Accumulations of a protein called alpha-synuclein also begin to appear from the marrow to the brain, spreading the disease throughout the brain. In addition to tremor and slowing (bradykinesia), there are other obvious symptoms such as:

The American researchers attached accelerometers to the arms of eight patients in the early stages of Parkinson's disease and to the arms of eight people of equal age and sex who were not sick. The participants then had to walk at a normal pace and, using acceleration data analyzed by software, the scientists discovered a asymmetry in significantly greater acceleration, low cross-correlation in the arms and less synchronization of the arms in early-stage Parkinson's patients.

According to the results, the lower cross-correlation and reduced synchronization would mean that the arm movements are poorly coordinated.

In other words, if I measure the position of the right arm, it is difficult to use that measurement to predict the position of the left arm, ”he said. "Parkinson's is known to have an impact on people's movement (neurologists have used this parameter as the basis for clinical examinations for a very, very long time) but here we are quantifying exactly, for the first time, how much the disease does not affect. only the relative amount of limb movements, but also how coordinated they are over time, says Joseph Cusumano, professor of engineering and mechanical science.

The Penn State team's method of evaluating arm swing can be applied quickly and inexpensively by primary care physicians, even before they scan the brain.

Measuring oscillation and coordination asymmetry with our method may be the cheapest and most effective method for detecting Parkinson's early, when it is still possible to treat the symptoms of the disease and improve longevity, concludes Piazza.

Of course, changes in arm movement aren't the only symptoms of Parkinson's.

Who is affected by Parkinson's disease, yes, has a reduction in the pendular movement of the arms (generally more accentuated on one side), but also a fixed posture in flexion and a decidedly shorter step. It may also happen that the patient begins to shuffle his feet on the ground and accelerate his pace to avoid falling.

But, in some cases, the cause of falls during the walk can also be episodes of sudden motor block (the so-called freezing gait or freezing of the march), ie an inability to start the march or change direction.

If you're a woman over 40, there's one more reason you just discovered to exercise and eat healthy ❯

add a comment of If you notice this while walking, it could be an early sign of Parkinson's