If you are under 30 and exposed to this level of pollution, your brain "ages" by 15 years

Yet another new research finds negative effects of smog on memory and work performance.

It seriously damages the brain and memory: the link between pollution and our intellectual abilities is a matter that has been debated for years, yet a solution is never found. Now, yet another new research finds negative effects of smog on memory and work performance: changes in cognitive function due to smog affect in practice the productivity of the workforce.


According to researchers from the University of Queensland and Carnegie Mellon University, even short-term exposure to air pollution affects our brain performance and ability to work.

Our research used data from Lumosity brain training games to study the impact of air pollution on adults living in the United States, explains Andrea La Nauze of the University of Queensland School of Economics.

The study, published in the National Bureau of Economic Research Working Paper, is based on the analysis of the data of almost five million users who, between 2015 and 2017, used an app to train the brain through games, aimed at stimulate seven different cognitive functions: memory, verbal skills, attention, flexibility, math skills, speed and problem solving.

The results showed that exposure to moderately high levels of fine particles causes a drop in performance of nearly six points on a scale of 0 to 100, with 100 being the highest score. The main problem is for the subjects under the age of 30 which, when exposed to these levels of pollution, suffer a decrease in cognitive functions equal to 15 years of aging. The biggest negative effects relate to memory.

The study also showed that the subjects most damaged by air pollution are the under 50s, those who are in full working age, with a consequent decline in their performance at work.

While the health effects of PM2,5 have been widely understood, this research was the first to use brain training data to study the potential impact on cognitive performance, La Nauze says.

Although the study used data from the United States, Dr La Nauze said the findings are relevant to Australia. 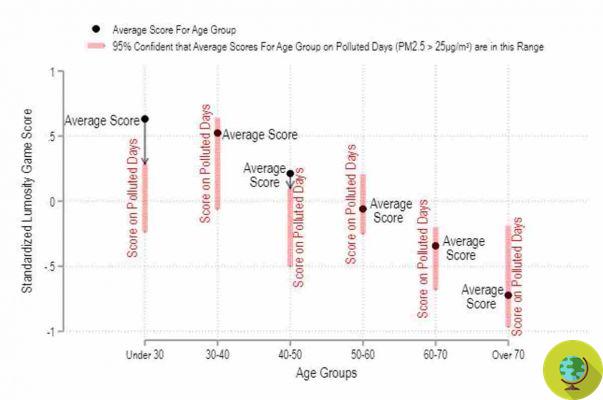 We believe our research has real implications for the Australian adult of average working age, particularly as bushfires become more frequent and contribute to air pollution levels, he said. The 2019-2020 bushfire crisis has subjected millions of Australians to the worst air pollution in the world. Although Australian air is clean enough by international standards, the average Australian is still exposed to higher levels of air pollution than the latest recommendations from the World Health Organization.

A bad story, that of the fires, which in 2019 alone and in Australia alone, generated 250 million tons of CO2, half of the country's annual emissions.

If you are over 60 you should give up on these 5 habits, according to science ❯

add a comment of If you are under 30 and exposed to this level of pollution, your brain "ages" by 15 years