Ichnusa beer relaunches the returnable void: here is the new bottle with a green cap 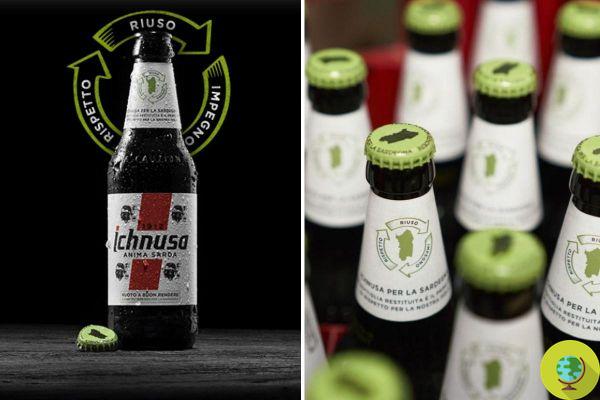 Ichnusa beer is tinged with green. The Sardinian brand recently relaunched the returnable void by inaugurating the new green line of bottles

Ichnusa beer is tinged with green. The Sardinian brand recently relaunched the returnable inaugurating the new green line of bottles.


Is called Empty to make good. The green cap will distinguish the new bottle together with the words "respect, reuse and commitment"Present in the collar. It will be mainly intended for bars and restaurants but is also available in 33 and 25 cl sizes.

Furthermore, the new production plant was recently presented in Assemini (Cagliari), which allowed the historic Sardinian brewery to increasingly reduce the quantity of glass used.

Thanks to the "Empty to make good" initiative, it will be possible to reuse the same bottle for over twenty years. The survey project was appreciated by 9 out of 10 Sardinians. Once emptied, in fact, the bottle will have to be returned and will be reused again.

“Reuse, commitment and respect. Three keywords that represent the virtuous circle of returnable void " explains the company. “This practice, which has been lost elsewhere, still resists in Sardinia and is a consolidated and virtuous tradition. The bottles are thus reused even for twenty years. They have a history and give an important message: respect for the environment ".

"Each bottle returned is a bottle that is not abandoned" continues the company.

If you love this beer, from now on you prefer the one with the green cap.

add a comment of Ichnusa beer relaunches the returnable void: here is the new bottle with a green cap