Hypertension: how to fight it with beet juice 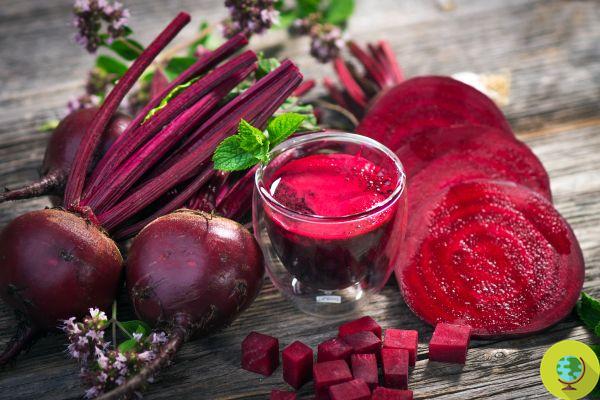 Pressure to the stars? Squeeze yourself a beet! Researchers from The Barts and The London Medical School argue, in a study published in Hypertension, a journal of the American Heart Association, that beet juice can make an important contribution to fighting hypertension. Taking just one cup of the precious nectar each day would lower your blood pressure by about 7%.

Pressure to the stars? Squeeze yourself a beet! They are the researchers of the The Barts and The London Medical School to support, in a study published on Hypertension, rivista dell’American Heart Association, that beetroot juice can make an important contribution to fighting hypertension. Taking just one cup of the precious nectar each day would lower your blood pressure by about 7%.

Tutto thanks to the presence of nitrate, at least according to the team of researchers, led by Amrita Ahluwalia, who demonstrated how the patients involved in the study saw their maximum and minimum pressure drop significantly. "Our hope is that the increase inintake of vegetables high in nitrates in the diet, such as green leafy vegetables or beets, it can be an easily applied lifestyle approach to improve cardiovascular health ", has explained the coordinator of the research group.

The beet juice given to the volunteers contained about 0,2 g of nitrate (which previous research also associated with improved physical and athletic performance), the equivalent of the content of two beets. But how do you lower your blood pressure? The body converts nitrate to a chemical called nitrite, and then into nitric oxide in the blood. Nitric oxide widens blood vessels and promotes natural blood flow.

“This study shows that those most at risk of heart disease and stroke, caused by high blood pressure, can benefit from consuming beetroot. We were surprised to find how little nitrate is needed to see an effect of such proportions, ”continues the researcher. But this substance is not found only in beets: it is also present with important levels in many other vegetables such as celery, kale and green leafy vegetables, especially spinach and lettuce.

The problem is that, to receive the same benefits, you would have to take a very high amount, which, instead, allows you to make a beetroot concentrate, vegetable with a thousand beneficial properties, all to be discovered!

- Beetroot: beneficial properties and how to use it

- “Natural doping” beetroot: faster and less tired thanks to nitrates

- Salt: the 6 unsuspected foods to avoid with high blood pressure

add a comment of Hypertension: how to fight it with beet juice