Hypericum: all the properties, benefits and contraindications of St. John's wort 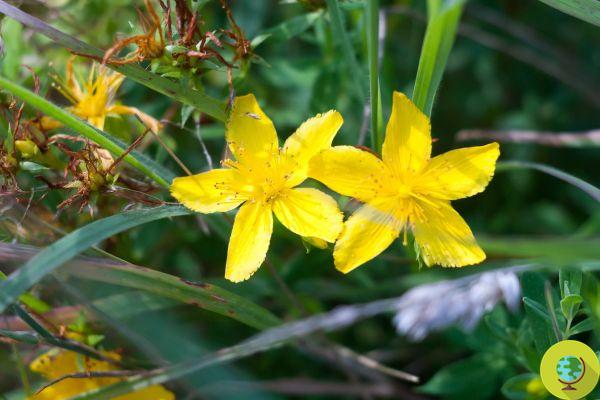 Natural antidepressant and useful remedy in different situations, St. John's wort or St. John's wort has numerous benefits but also contraindications that should not be underestimated.

Natural antidepressant and useful remedy in different situations, St. John's wort or St. John's wort has numerous benefits but also contraindications that should not be underestimated

You will probably have seen some beautiful ones in some spring-summer meadow yellow flowers which according to ancient customs are collected in particular on June 24, the day dedicated to San Giovanni. According to popular tradition, in fact, the herbs collected on this night have a particular power, they are able to chase away all disease and all their characteristics and properties are exalted and at maximum power.


Read also: Hypericum or St. John's wort, uses and potential The flowers collected from this plant are then used to produce a hypericum-based oil, beneficial for the health of the skin but not only.

Surely among the property more well-known than hypericum is its ability to combat depressive states and anxious. St. John's wort is in fact considered a powerful natural antidepressant and used alone or in combination with other natural remedies (such as passion flower or valerian) in cases where, at the same time, mood problems are present. , disorders such as insomnia o anxiety.

It seems that the antidepressant action of St. John's wort, currently also confirmed by various scientific researches, is due in particular to the ability to increase serotonin levels as well as, in the case of sleep disorders, to regulating the production of melatonin in turn responsible for an effective sleep-wake rhythm.

Traditionally then the Hypericum was used to treat wounds and burns, thanks to its anti-inflammatory, healing and regenerative power against the skin. In this sense, St. John's wort oil is very useful, which can also be self-produced starting from the flowers, to be collected in the summer.

In the past, the Hypericum was then used as a disinfectant for its antibiotic, antiviral, antifungal and antiseptic qualities, or as a pain reliever to apply in case of pain or wounds.

Thanks to its naturally sedative and antidepressant action against the nervous system, hypericum can be an excellent remedy in times of great stress in which perhaps you feel down on a psychological and emotional level, even more so if in addition to the bad mood you are subject even to anxiety attacks.

Since St. John's Wort helps to have a positive mental attitude, this plant is often recommended as a mood booster when deciding to stop smoking.

In this case, in lighter cases, we recommend St. John's wort herbal tea and other plants with calming and sedative power. If, on the other hand, the situation is more chronic or you need a stronger and more immediate action, you have recourse to gods real supplements, products in which the active ingredients of the plant are more concentrated.

Given its anti-inflammatory power, hypericum can also be recommended in case of gastritis or gastric ulcer.

THEhypericum oil it can be found readily available in all herbalists and pharmacies, it can be very useful in case of minor burns, wounds, dry skin, fungus, scars, stretch marks o Psoriasis. Just applying a few drops several times a day to have a soothing and healing effect, also excellent to massage on the perineum to massage and rehabilitate it after childbirth.

Let's not forget that, like many other vegetable oils, St. John's wort which is characterized by a color that tends to reddish is an excellent natural anti-aging. Applying it every night before going to sleep on the face and neck can have good results, sometimes even better than the most well-known anti-wrinkle products.

If you want to try to self-produce yours hypericum oil you can follow the recipe you find here:

Hypericum is one of the natural remedies with more marked contraindications and absolutely not to be underestimated. In fact, St. John's wort it can interact with different types of drugs going to increase or decrease the effect with very dangerous health risks. This is why, before choosing this remedy, it is always better to ask the opinion of your doctor who will evaluate whether it is a more or less viable solution based on the state of health and the intake of medicines. The ones with which the greatest interference is noted are antidepressants, some cancer drugs, anticoagulants and medicines that are taken for heart problems, transplants or AIDS.

Hypericum it also conflicts with the birth control pill and could nullify its effectiveness. Absolutely not recommended for use even during pregnancy and breastfeeding.

Also be careful to use St. John's wort oil and then undergo tanning lamps or sunlight. In fact, his are known photosensitizing effects which can create irritation and skin problems.

add a comment of Hypericum: all the properties, benefits and contraindications of St. John's wort